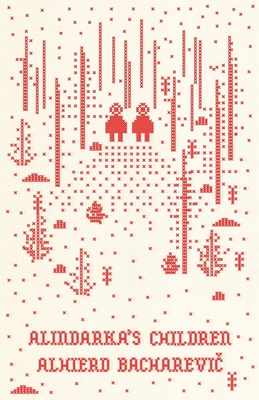 Alindarka’s Children is the masterful English debut of Alhierd Bacharevic, a new voice from Belarus

It’s not Avi’s fault, it’s those sourish, mind-bending little berries that are to blame, those tiny wee spheres. Bilberries, bletherberries that befuddle the mind, babbleberries that give you a kick. The beautiful green forest scales, the timber songs, play out like a kaleidoscope before his eyes. It’s hard tae breathe, yer haunds skedaddle awa…


In a camp at the edge of a forest children are trained to forget their language through drugs, therapy, and coercion. Alicia and her brother Avi are rescued by their father, but they give him the slip and set out on their own. In the forest they encounter a cast of villains: the hovel-dwelling Granmaw, the language-traitor McFinnie, the border guard and murderer Bannock the Bogill, and a wolf.

A manifesto for the survival of the Belarusian language and soul, Alindarka's Children is also a feat of translation. Winner of the English Pen Award, the novel has been brilliantly rendered into English (from the Russian) and Scots (from the Belarusian): both Belarusian and Scots are on the UNESCO Atlas of Endangered Languages.

ALHIERD BACHAREVIC was born in Minsk in 1975. In the 1990s, he was the lead singer of the Belarusian-language punk band Pravakacyja (‘Provocation’). Bacharevic has worked as a teacher of Belarusian, a journalist, and is one of the founders of the avant-garde group Bum-Bam-Lit. Bacharevic was awarded the 2021 Erwin Piscator Prize, and nominated for the 2021 Republic of Consciousness Prize. His books have been translated into German, French, Polish and Russian. He fled Belarus and is now based in Austria.

PETRA REID is a translator and the author of MacSonnetries.

A dark fantasy by one of Belarus’s most original contemporary writers. It captures the depths of frustration, grief, and resolve building up for decades under the deceptively placid surface of Belarusian life. Both a translation and a collage—an independent, multilingual literary work.
— Jaroslaw Anders - The New York Review of Books

You can take this book on many levels, from the philosophical and psychological analysis of what it does to a nation and a people to remove, control and suppress its mother tongue, to an exciting tale of two runaway children.
— The Scotsman