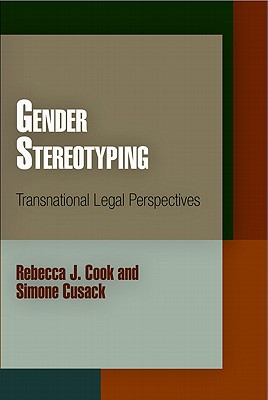 Drawing on domestic and international law, as well as on judgments given by courts and human rights treaty bodies, Gender Stereotyping offers perspectives on ways gender stereotypes might be eliminated through the transnational legal process in order to ensure women's equality and the full exercise of their human rights.

A leading international framework for debates on the subject of stereotypes, the Convention on the Elimination of All Forms of Discrimination against Women, was adopted in 1979 by the UN General Assembly and defines what constitutes discrimination against women. It also establishes an agenda to eliminate discrimination in all its forms in order to ensure substantive equality for women. Applying the Convention as the primary framework for analysis, this book provides essential strategies for eradicating gender stereotyping. Its proposed methodology requires naming operative gender stereotypes, identifying how they violate the human rights of women, and articulating states' obligations to eliminate and remedy these violations. According to Rebecca J. Cook and Simone Cusack, in order to abolish all forms of discrimination against women, priority needs to be given to the elimination of gender stereotypes. While stereotypes affect both men and women, they can have particularly egregious effects on women, often devaluing them and assigning them to subservient roles in society. As the legal perspectives offered in Gender Stereotyping demonstrate, treating women according to restrictive generalizations instead of their individual needs, abilities, and circumstances denies women their human rights and fundamental freedoms.

Rebecca J. Cook is Professor of Law and Faculty Chair in International Human Rights, Faculty of Law, at the University of Toronto. She is the author, coauthor, or coeditor of many books, including Human Rights of Women: National and International Perspectives, also published by the University of Pennsylvania Press. Simone Cusack is a public interest lawyer at the Public Interest Law Clearing House in Melbourne, Australia.