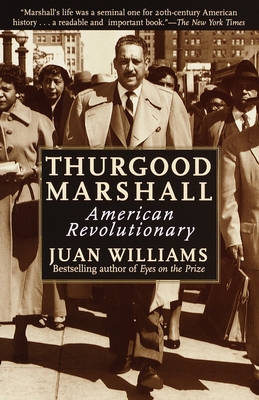 A NEW YORK TIMES NOTABLE BOOK • The definitive biography of the great lawyer and Supreme Court justice, from the bestselling author of Eyes on the Prize

Thurgood Marshall was the twentieth century’s great architect of American race relations. His victory in the Brown v. Board of Education decision, the landmark Supreme Court case outlawing school segregation in the United States, would have made him a historic figure even if he had never been appointed as the first African-American to serve on the Supreme Court. He had a fierce will to change America, which led to clashes with Martin Luther King, Jr., Malcom X, and Robert F. Kennedy. Most surprising was Marshall’s secret and controversial relationship with the FBI chief J. Edgar Hoover.

Based on eight years of research and interviews with over 150 sources, Thurgood Marshall is the sweeping and inspirational story of an enduring figure in American life who rose from the descendants of slaves to become an American hero.

Juan Williams has been a political analyst and national correspondent for The Washington Post for twenty-one years. He has written for Fortune,The Atlantic Monthly, Ebony, GQ, and Newsweek, for which he is a regular columnist. Mr. Williams has earned widespread critical acclaim for a series of documentaries, including one that won him an Emmy Award. His numerous and frequent television appearances include Oprah, Nightline, Washington Week in Review, CNN's Crossfire (where he often served as co-host), and Capitol Gang Sunday. Currently a regular panelist on Fox News Sunday, he lives in Washington, D.C.

"Marshall's life was a seminal one for twentieth-century American history, and it is well told in Mr. Williams's readable and important book."--The New York Times

"This is a must-read for all Americans concerned with the struggle for civil and individual rights."--Booklist (Editors' Choice, 1998)