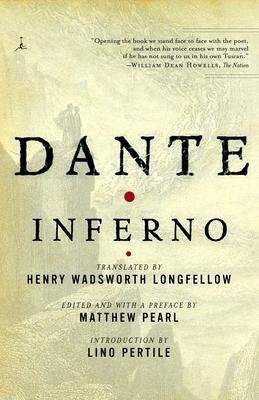 In 1867, Henry Wadsworth Longfellow completed the first American translation of Inferno and thus introduced Dante’s literary genius to the New World. In the Inferno, the spirit of the classical poet Virgil leads Dante through the nine circles of Hell on the initial stage of his journey toward Heaven. Along the way Dante encounters and describes in vivid detail the various types of sinners in the throes of their eternal torment.

Henry Wadsworth Longfellow, American poet, educator, and linguist, wrote many long narrative poems, including The Song of Hiawatha, Evangeline, and The Courtship of Miles Standish.

Matthew Pearl is the New York Times bestselling author of The Dante Club, The Poe Shadow, The Last Dickens, The Technologists, The Last Bookaneer, and The Dante Chamber, and the editor of the Modern Library editions of Dante’s Inferno (translated by Henry Wadsworth Longfellow) and Edgar Allan Poe’s The Murders in the Rue Morgue: The Dupin Tales. His books have been translated into more than thirty languages, and his nonfiction writing has appeared in The New York Times, The Wall Street Journal, The Boston Globe, and Slate.

Lino Pertile is a professor of Romance languages and literature at Harvard University. He specializes in Dante and the Latin Middle Ages.

“Opening the book we stand face to face with the poet, and when his voice ceases we may marvel if he has not sung to us in his own Tuscan.” —William Dean Howells, The Nation
My Account • Sign In • Sign Out • Register
NEW & USED BOOKS
AUTHOR EVENTS • GIFTS
Tempe
6428 South McClintock Drive
480.730.0205
[Google Map]
10am-7pm daily
Trade Counter 11am-6pm daily