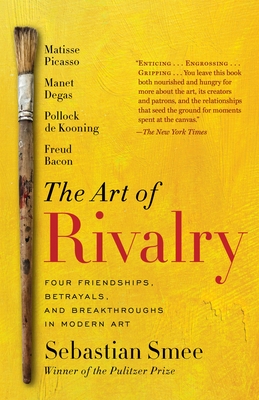 This approachable and engaging book is loaded with entertaining history and lesser known facts about the artists examined. Interestingly conceived, it was fascinating to learn how the artists' friendships and rivalries propelled each of their careers in very different directions. The result is an absorbing perspective on the development of "Modern Art". This is an excellent read for anyone who wants to expand their knowledge of art history or really anyone who has ever wondered exactly how all that thrown paint, abstraction, and contortion came to be called Art. — From Walt's Picks (page 1)

Rivalry is at the heart of some of the most famous and fruitful relationships in history. The Art of Rivalry follows eight celebrated artists, each linked to a counterpart by friendship, admiration, envy, and ambition. All eight are household names today. But to achieve what they did, each needed the influence of a contemporary—one who was equally ambitious but possessed sharply contrasting strengths and weaknesses.

Edouard Manet and Edgar Degas were close associates whose personal bond frayed after Degas painted a portrait of Manet and his wife. Henri Matisse and Pablo Picasso swapped paintings, ideas, and influences as they jostled for the support of collectors like Leo and Gertrude Stein and vied for the leadership of a new avant-garde. Jackson Pollock’s uninhibited style of “action painting” triggered a breakthrough in the work of his older rival, Willem de Kooning. After Pollock’s sudden death in a car crash, de Kooning assumed Pollock's mantle and became romantically involved with his late friend’s mistress. Lucian Freud and Francis Bacon met in the early 1950s, when Bacon was being hailed as Britain’s most exciting new painter and Freud was working in relative obscurity. Their intense but asymmetrical friendship came to a head when Freud painted a portrait of Bacon, which was later stolen.

Each of these relationships culminated in an early flashpoint, a rupture in a budding intimacy that was both a betrayal and a trigger for great innovation. Writing with the same exuberant wit and psychological insight that earned him a Pulitzer Prize for art criticism, Sebastian Smee explores here the way that coming into one’s own as an artist—finding one’s voice—almost always involves willfully breaking away from some intimate’s expectations of who you are or ought to be.

Praise for The Art of Rivalry

“Gripping . . . Mr. Smee’s skills as a critic are evident throughout. He is persuasive and vivid. . . . You leave this book both nourished and hungry for more about the art, its creators and patrons, and the relationships that seed the ground for moments spent at the canvas.”—The New York Times

“With novella-like detail and incisiveness [Sebastian Smee] opens up the worlds of four pairs of renowned artists. . . . Each of his portraits is a biographical gem. . . . The Art of Rivalry is a pure, informative delight, written with canny authority.”—The Boston Globe

Sebastian Smee is an art critic for the Washington Post. He was previously the chief art critic at the Boston Globe, where he won the Pulitzer Prize for Criticism in 2011, having been a runner-up in 2008. He joined the Boston Globe’s staff from Sydney, where he worked as national art critic forThe Australian between 2004 and 2008. Prior to that, he lived for four years in the UK, where he worked on staff at The Art Newspaper, and wrote for The Daily Telegraph, The Guardian, The Independent, The Times, The Financial Times, Prospect Magazine, and The Spectator. He has contributed to five books on Lucian Freud. He teaches non-fiction writing at Wellesley College.

“Gripping . . . Mr. Smee’s skills as a critic are evident throughout. He is persuasive and vivid. . . . The Art of Rivalry is rooted in a closely observed theory, but it roams in a way geared to nonspecialist readers, part mini-biographies, part broader art history. . . . You leave this book both nourished and hungry for more about the art, its creators and patrons, and the relationships that seed the ground for moments spent at the canvas.”—The New York Times

“With novella-like detail and incisiveness [Sebastian Smee] opens up the worlds of four pairs of renowned artists. . . . Each of his portraits is a biographical gem, deftly taking social milieus, family backgrounds, and the art controversies of the day into account. . . . Smee’s vivid, agile prose is especially good at evoking the temperaments of the personalities involved. . . . The Art of Rivalry is a pure, informative delight, written with canny authority.”—The Boston Globe

“Bacon liked to say his portraiture aimed to capture ‘the pulsations of a person.’ Revealing these rare creators as the invaluable catalysts they also were, Smee conveys exactly that on page after page. . . . His brilliant group biography is one of a kind.”—The Atlantic

“Perceptive . . . [Sebastian Smee showcases] the crucial painter-vs.-painter passions that spurred eight brilliant modern artists toward their greatest work. . . . Smee is onto something important. His book may bring us as close as we’ll ever get to understanding the connections between these bristly bonds and brilliance.”—The Christian Science Monitor

“In this intriguing work of art history and psychology, The Boston Globe’s art critic looks at the competitive friendships of Matisse and Picasso, Manet and Degas, Pollock and de Kooning, and Freud and Bacon. All four relationships illuminate the creative process—both its imaginative breakthroughs and its frustrating blocks.”—Newsday

“A fresh and fruitful approach to art history . . . [Sebastian] Smee’s double portraits are deeply moving, even haunting in their investigations of artistic and emotional symbioses of incalculable intricacy and consequence.”—Booklist (starred review)

“The keynotes of Sebastian Smee’s criticism have always included a fine feeling for the what of art—he knows how to evoke the way pictures really strike the eye—and an equal sense of the how of art: how art emerges from the background of social history. To these he now adds a remarkable capacity for getting down the who of art—the enigma of artists’ personalities, and the way that, two at a time, they can often intersect to reshape each in the other’s image. With these gifts all on the page together, The Art of Rivalry gives us a remarkable and engrossing book on pretty much the whole of art.”—Adam Gopnik, author of Paris to the Moon and The Table Comes First

“Modern art’s major pairs of frenemies are a subject so fascinating, it’s strange to have a book on it only now—and a stroke of luck, for us, that the author is Sebastian Smee. He brings the perfect combination of artistic taste and human understanding, and a prose style as clear as spring water, to the drama and occasional comedy of men who inspired and annoyed one another to otherwise inexplicable heights of greatness.”—Peter Schjeldahl, art critic for The New Yorker

“This is a magnificent book on the relationships at the roots of artistic genius. Smee offers a gripping tale of the fine line between friendship and competition, tracing how the ties that torment us most are often the ones that inspire us most.”—Adam Grant, Wharton professor and New York Times bestselling author of Originals and Give and Take
My Account • Sign In • Sign Out • Register
NEW & USED BOOKS
AUTHOR EVENTS • GIFTS
Tempe
6428 South McClintock Drive
480.730.0205
[Google Map]
10am-7pm daily
Trade Counter 11am-6pm daily