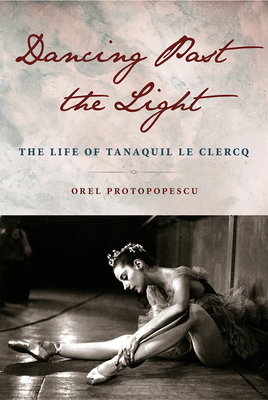 Dancing Past the Light cinematically illuminates the glamorous and moving life story of Tanaquil "Tanny" Le Clercq (1929‒2000), one of the most celebrated ballerinas of the twentieth century, describing her brilliant stage career, her struggle with polio, and her important work as a dance teacher, coach, photographer, and writer.

Born in Paris, Le Clercq became a principal dancer with the New York City Ballet at age 19 and a role model for aspiring dancers everywhere. Orel Protopopescu recounts Le Clercq's intense marriage to the company's renowned choreographer George Balanchine, for whom Le Clercq was a muse, the prototype of the exquisite, long-limbed "Balanchine ballerina." Enhanced with a wealth of previously unpublished photos, personal letters, and sketches by Balanchine, this book offers an intimate portrait of Le Clercq's dancing life and her relationship to the man who was both her mentor and husband. It delves into her friendships with other dancers as well, including a longtime rival for her affections, choreographer Jerome Robbins.

Le Clercq contracted polio while on tour in Europe at age 27 and would never dance again. This book offers a rare account of how Le Clercq grappled with a fate considered unimaginable for a ballerina and began to share her love of dance as a writer and dance teacher. It also highlights Le Clercq's role in the struggles for racial equality and disability rights. Her art was her vehicle: she and Arthur Mitchell made history as the couple in New York City Ballet's first interracial pas de deux at City Center in 1955 and later she taught from a wheelchair at his Dance Theatre of Harlem.

With insights from interviews with her friends, students, and colleagues, Dancing Past the Light depicts the joys and the dark moments of Le Clercq's dramatic life, celebrating her mighty legacy.