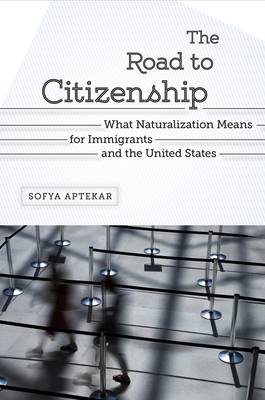 Between 2000 and 2011, eight million immigrants became American citizens. In naturalization ceremonies large and small these new Americans pledged an oath of allegiance to the United States, gaining the right to vote, serve on juries, and hold political office; access to certain jobs; and the legal rights of full citizens.
In The Road to Citizenship, Sofya Aptekar analyzes what the process of becoming a citizen means for these newly minted Americans and what it means for the United States as a whole. Examining the evolution of the discursive role of immigrants in American society from potential traitors to morally superior “supercitizens,” Aptekar’s in-depth research uncovers considerable contradictions with the way naturalization works today. Census data reveal that citizenship is distributed in ways that increasingly exacerbate existing class and racial inequalities, at the same time that immigrants’ own understandings of naturalization defy accepted stories we tell about assimilation, citizenship, and becoming American. Aptekar contends that debates about immigration must be broadened beyond the current focus on borders and documentation to include larger questions about the definition of citizenship.
Aptekar’s work brings into sharp relief key questions about the overall system: does the current naturalization process accurately reflect our priorities as a nation and reflect the values we wish to instill in new residents and citizens? Should barriers to full membership in the American polity be lowered? What are the implications of keeping the process the same or changing it? Using archival research, interviews, analysis of census and survey data, and participant observation of citizenship ceremonies, The Road to Citizenship demonstrates the ways in which naturalization itself reflects the larger operations of social cohesion and democracy in America.

SOFYA APTEKAR is an assistant professor of sociology at the University of Massachusetts Boston.

"The Road to Citizenship is an important addition to the recent scholarly efforts to examine and understand the naturalization process primarily in the United States, but with cohesive and well-integrated comparative material from Canada, Australia, and Europe as well."
— Luis F. B. Plascencia

"Citizenship matters. But as Aptekar reveals in this superb book, its egalitarian promise is in question. Drawing on government statistics, immigrants’ own words and highly original analyses of naturalization speeches, Aptekar shows that immigrants’ citizenship is fraught by inequality."
— Irene Bloemraad

"Citizenship matters because, among other things, naturalized immigrants are able to vote, compete for jobs unavailable to noncitizens, receive priority for family members who also wish to immigrate to the US, and enjoy protection against deportation.  Aptekar should know, because she experienced the naturalization process as an immigrant from Russia ... Highly recommended."
— CHOICE

"An excellent book for policymakers, politicians, and academia in undergraduate immigration and inequality classes in sociology and other policy-related disciplines."
— Social Forces

"Presents a clear picture of the naturalization experience in contemporary America … Aptekar's creative data collection and theoretical discussion distinguish The Road to Citizenship from much of the research in immigration studies."
— International Migration Review