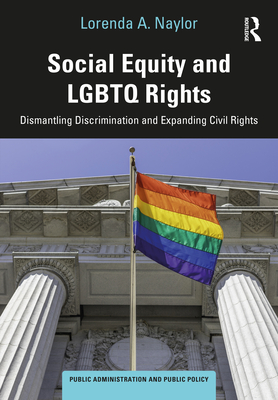 By Lorenda A. Naylor
Email or call for price

Can a baker refuse to make a wedding cake for a gay couple? Despite the U.S. Supreme Court decision guaranteeing marriage equality in 2015, lesbian, gay, bisexual, transgender, and queer (LGBTQ) citizens in the United States continue to be discriminated against in fundamental areas that others take for granted as a legal right. Using social equity theory and intersectionality but written in an accessible style, this book demonstrates some of the ways in which LGBTQ citizens have been marginalized for their identity and argues that the field of public administration has a unique responsibility to prioritize social equity. Categories utilized by the U.S. Census Bureau (male or female, heterosexual or homosexual), for example, must shift to a continuum to accurately capture demographic characteristics and citizen behavior. Evidenced-based outcomes and disparities between cisgender and heterosexual and LGBTQ populations are carefully delineated to provide a legal rationale for a compelling governmental interest, and policy recommendations are provided - including overdue federal legislation to prohibit discrimination based on sexual orientation and gender identity.

Lorenda A. Naylor is an associate professor at the University of Baltimore, College of Public Affairs, School of Public & International Affairs. She is the program director for the undergraduate degree program Policy, Politics and International Affairs. Dr. Naylor has recently been approved as a U.S. Fulbright Specialist. She is a social equity researcher. Her research focuses on the intersection of marginalized populations, government access, and constitutional rights. Prior to joining the academy, she worked in state and local government in maternal child health, foster care, and adoption.