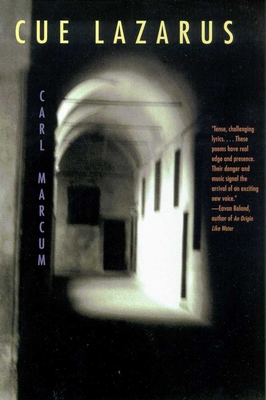 A '77 Pinto. Two boys "a few months from their driver's license." And in the back seat, a ghost of the present observing this scene refracted by memory.

In this collection of poetry by Carl Marcum, a young man traces his rise to consciousness, his coming of age in the Southwest as a medio, an individual of mixed race. Displaying his Hispanic heritage as fact, emblem, and music in his poems, Marcum balances hip humor with larger themes of loss and reinvention to paint a work of seriousness and imagination, wrestling sense from the giddy rush of experience. The lead poem, "Cue Lazarus," conveys the sense of loss that permeates the collection, revisiting time the author spent with a friend he now knows will die. It sets the tone for the explorations to follow as the poet haunts his past: death, traumatic experience, the uneasiness that comes from being unable to forestall tragedy, all combine to create a sense of paradox, that he who endures becomes a ghost compelled to haunt his own life.

As poetry becomes a subtle game of language, experience is refigured as an array of possibilities; Marcum finds meaning and epiphany through close observation as he revels in images of constant motion and sustained search. Here is a suite in celebration of Chevys ("That Camaro ran nearly on machismo alone") and a prayer for breakfast ("I'd like to renounce the salt and pepper shakers / of this life. But the eggs are here / twelve lines into this poem / and getting cold"). He dreams of himself as Pancho Villa, "my poetry at the end of a pistol," and invokes the spirits of poets past, "beggars on the media of Limbo, holding shabby signs: WILL WORK FOR TRUTH."

Ultimately, Cue Lazarus is about resurrection—of the spirit, of a life, of an identity. It marks the emergence of a vital new voice that, in baring his soul, reveals lessons as old as time.

Carl Marcum was born in Nogales, Arizona, to a Mexican mother and an Anglo father. He lives in Brisbane, California, and is currently a Wallace Stegner Fellow at Stanford University.

"Marcum senses the meaning of his life and of his 'Chicanismo.' He has found the answer to the eternal question that faces our Raza: Who are we? He bares his soul to help the reader end his own search and come to terms with his identity." —La Prensa San Diego