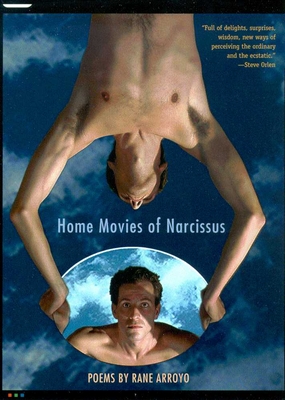 A first-generation Latino born in Chicago, Rane Arroyo is a leading poeta puertorriqueño and playwright whose readership transcends his ethnicity. In Home Movies of Narcissus, his fourth collection of poetry, he writes more deliberately and with greater assurance of his search for identity—both cultural/racial and gender/sexual—and his discovery of it within family and community.

Using sophisticated language to inspect life from barrio childhood to cosmopolitan manhood, Arroyo explores themes of gay strength and alienation, linked to his experiences as both a Puerto Rican and an intellectual. Through a variety of approaches, he examines a major recurrent Latino paradox: the need to write about Latino issues while being criticized for being too self-centered.

Sometimes reserved, sometimes passionate, Arroyo writes with humor and a remarkable quickness of association, moving with a grace that makes seamless use of speech ranging from the formal to the vernacular. Taking in love and sexuality, world literature and history, and the exile's heritage of a shifting geography of identity, he invokes remarkable imagery with language that is economical, fresh, and mischievous. Some of Arroyo's poems take an autobiographical approach and show how poets have both the luxury and necessity of speaking for those in their lives.

Others create personas that take in the American experience from a variety of viewpoints—including gays, who are often marginalized by the larger Latino community. "The Ponce de León Poems" pit the poet against a ghost who seeks to direct his writing, while a final section, "The Black Moon Poems," deals with the many sleepless nights that Arroyo has spent struggling with questions over the worth of his art and whether he has betrayed those he loves by writing-or not writing-about them. "In his home movies," he writes, "Narcissus is both the seen and the seer." As Arroyo's insightful words demonstrate, the writer must come to value his own image but not fall in love with it, for it will change, age, and, if he is fortunate, finally grow wise. As readers will discover in Home Movies of Narcissus, Rane Arroyo has seen past the mirror and charted a new territory of self-discovery.

Rane Arroyo's previous collections include The Singing Shark, which won the Carl Sandburg Poetry Award. He is Professor of Creative Writing at the University of Toledo.

"Arroyo's hyperallusive free verse and his combination of themes drive this appealing mix of ambition and insight."—Publishers Weekly