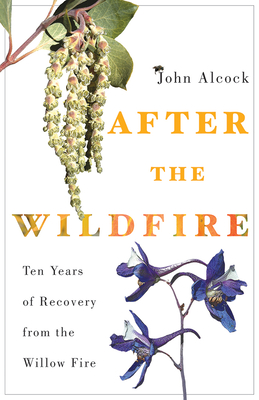 Swallowtail butterflies frolic on the wind. Vireos and rock wrens sing their hearts out by the recovering creek. Spiders and other predators chase their next meal. Through it all, John Alcock observes, records, and delights in what he sees. In a once-burnt area, life resurges. Plants whose seeds and roots withstood an intense fire become habitat for the returning creatures of the wild. After the Wildfire describes the remarkable recovery of wildlife in the Mazatzal Mountains in central Arizona.

It is the rare observer who has the dedication to revisit the site of a wildfire, especially over many years and seasons. But naturalist John Alcock returned again and again to the Mazatzals, where the disastrous Willow fire of 2004 burned 187 square miles. Documenting the fire’s aftermath over a decade, Alcock thrills at the renewal of the once-blackened region. Walking the South Fork of Deer Creek in all seasons as the years passed, he was rewarded by the sight of exuberant plant life that in turn fostered an equally satisfying return of animals ranging from small insects to large mammals.

Alcock clearly explains the response of chaparral plants to fire and the creatures that reinhabit these plants as they come back from a ferocious blaze: the great spreadwing damselfly, the western meadowlark, the elk, and birds and bugs of rich and colorful varieties. This book is at once a journey of biological discovery and a celebration of the ability of living things to reoccupy a devastated location. Alcock encourages others to engage the natural world—even one that has burnt to the ground.

John Alcock is an Emeritus Regents’ Professor in the School of Life Sciences at Arizona State University, where he taught from 1973 until 2008. He is the author of several books, including Sonoran Desert Spring and Sonoran Desert Summer. Alcock is a hiker and photographer.

“Alcock takes advantage of an increasingly common phenomenon—a severe wildfire—to present an engaging exploration of the natural history of a desert mountain range. The wildfire serves as a long-term site for Alcock´s hikes and observations of nature, in which he shares the biological basis of ecosystem changes, as well as his deep appreciation of the beauty and mystery of the desert mountains. Readers will be inspired to observe the natural environments around their own homes.”—Peter Fulé, Northern Arizona University School of Forestry

“Like taking a walk with Thoreau or Leopold, this is a unique and fascinating book. Accounting recovery after the Willow fire, naturalist John Alcock relates seasonal walks among the chaparral plants along Deer Creek during the previous decade. The hidden lives of wildflowers, birds, mammals, reptiles, and insects come alive, along with his evolutionary explanations for their myriad adaptations to the desert environment and recent fire.”—Stephen Buchmann, author of The Reason for Flowers


“In thirty-six short chapters, with a cross-reference of common and scientific names, this is a high-quality production with sixty photos of landscapes and insect, avian, and terrestrial inhabitants. This work is destined to become a classic example of long-term research.”—Choice