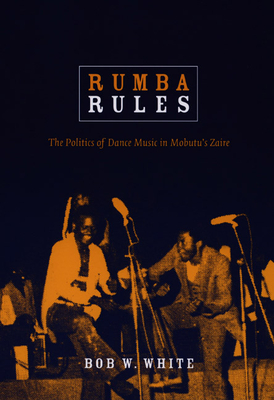 Mobutu Sese Seko, who ruled Zaire (now the Democratic Republic of Congo) from 1965 until 1997, was fond of saying "happy are those who sing and dance," and his regime energetically promoted the notion of culture as a national resource. During this period Zairian popular dance music (often referred to as la rumba za roise) became a sort of musica franca in many parts of sub-Saharan Africa. But how did this privileged form of cultural expression, one primarily known for a sound of sweetness and joy, flourish under one of the continent's most brutal authoritarian regimes? In Rumba Rules, the first ethnography of popular music in the Democratic Republic of Congo, Bob W. White examines not only the economic and political conditions that brought this powerful music industry to its knees, but also the ways that popular musicians sought to remain socially relevant in a time of increasing insecurity.

Drawing partly on his experiences as a member of a local dance band in the country's capital city Kinshasa, White offers extraordinarily vivid accounts of the live music scene, including the relatively recent phenomenon of libanga, which involves shouting the names of wealthy or powerful people during performances in exchange for financial support or protection. With dynamic descriptions of how bands practiced, performed, and splintered, White highlights how the ways that power was sought and understood in Kinshasa's popular music scene mirrored the charismatic authoritarianism of Mobutu's rule. In Rumba Rules, Congolese speak candidly about political leadership, social mobility, and what it meant to be a bon chef (good leader) in Mobutu's Zaire.

Bob W. White is Associate Professor of Anthropology at the University of Montreal.