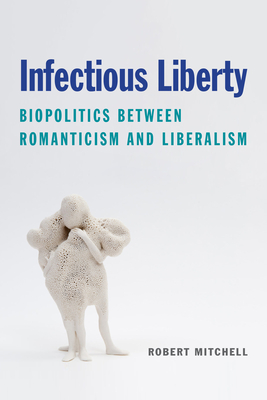 Infectious Liberty traces the origins of our contemporary concerns about public health, world population, climate change, global trade, and government regulation to a series of Romantic-era debates and their literary consequences. Through a series of careful readings, Robert Mitchell shows how a range of elements of modern literature, from character-systems to free indirect discourse, are closely intertwined with Romantic-era liberalism and biopolitics.

Eighteenth- and early-nineteenth century theorists of liberalism such as Adam Smith and Thomas Malthus drew upon the new sciences of population to develop a liberal biopolitics that aimed to coordinate differences among individuals by means of the culling powers of the market. Infectious Liberty focuses on such authors as Mary Shelley and William Wordsworth, who drew upon the sciences of population to develop a biopolitics beyond liberalism. These authors attempted what Roberto Esposito describes as an "affirmative" biopolitics, which rejects the principle of establishing security by distinguishing between valued and unvalued lives, seeks to support even the most abject members of a population, and proposes new ways of living in common. Infectious Liberty expands our understandings of liberalism and biopolitics--and the relationship between them--while also helping us to understand better the ways creative literature facilitates the project of reimagining what the politics of life might consist of. Infectious Liberty is available from the publisher on an open-access basis.

Robert Mitchell is Chair of English at Duke University, where he also directs the Center for Interdisciplinary Studies in Science and Cultural Theory. His most recent book, Experimental Life: Vitalism in Romantic Science and Literature, won the Michelle Kendrick Memorial Book Prize and the BSLS Book Prize.