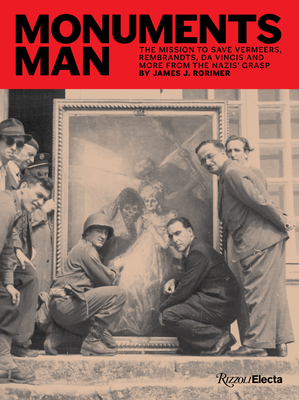 A classic now back in print and enriched with new imagery, James J. Rorimer’s riveting first-hand account takes readers on a treasure hunt as he follows the Allied troops across France and Germany to save Nazi-stolen masterpieces of art.

James J. Rorimer, former director of the Metropolitan Museum of Art, became a leading figure in the art recovery unit known as the Monuments Men, an elite group imbedded in the US Army, who risked their lives during World War II to save Europe’s greatest artworks from Hitler’s grasp. In the film Monuments Men, Matt Damon’s character is based on Rorimer as he embarks on the world’s most dangerous real-life hunt for stolen artworks with the goal of locating, seizing, and returning the works to their original holders, including museums and private collectors.

This new edition of a book first published in 1950 includes the original illustrations from the first edition plus a wealth of new imagery and ephemera uncovered during extensive research, including WWII photo-graphs, many taken by Rorimer himself, that are accompanied by gorgeous reproductions of many of the Old Masters Rorimer helped save by artists such as Rembrandt, Leonardo da Vinci, Bruegel, Vermeer, Goya, Velazquez, and van Eyck. Maps created specially for this volume, and other facts about WWII history and geography, add new dimension to a remarkable story of courage, perseverance, and ultimately, triumph.

James J. Rorimer was curator at the Metropolitan Museum of Art until 1955 when he was made director of the museum, a position he held until his death in 1966. Anne Rorimer, daughter of the author, is an art consultant and an author. Louis Rorimer, son of the author, is a lawyer by profession. Lynn Nicholas is author of The Rape of Europa (1995), winner of the National Book Critics Circle Award.

“Monuments Man provides a moving and thought-provoking account of Rorimer’s work and the atrocious circumstances in which he and his colleagues were operating.  But reading his account anew, it really brought home to me the degree to which it is thanks to the rapid actions and dedication of Rorimer and his colleagues that so many treasures were saved from flooding salt mines, abandoned railroad trucks, fires, appalling humidity and inappropriate storage conditions, and rampant looting by all sides.  And, equally, thanks to their scholarship and dedication that these objects were then catalogued and processed and returned to the collections and homes from which they had been taken by the Nazis. Rorimer’s book provides a moving testimony that if wars and mass murder can be unleashed by a single evil person, aided and abetted by a corrupted political system, the antidote to that tyranny is provided by brave individuals who devote their lives to doing the right thing. Rorimer was one of those men.” —Thomas Campbell, former Director and CEO of The Metropolitan Museum of Art and current Director and CEO of Fine Arts Museums of San Francisco