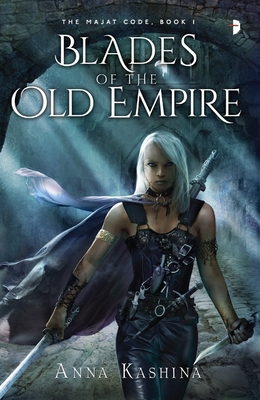 Elite, deadly mercenaries, an evil ancient brotherhood, a centuries-old (yet still hot) forest mother, and – of course – magic, are just the beginning of the many wonderful things within this book. Kashina’s characters are both real and complex – my favorite kind – and I’m already stamping my feet with impatience for the sequel. If you don’t finish this book secretly wishing you were a Diamond-ranked Majat warrior capable of performing the Viper’s Kiss in blazing combat, I feel sorry for you. Happy sword-fighting, er, reading. I meant reading.

Action, intrigue, and romance collide in this epic first installment of the Majat Code fantasy series

When Prince Kythar falls under attack in his own castle, he has no idea that his enemies are none other than the ancient Kaddim Brotherhood. Kyth's inborn ability to control the elements is the only power that can stop the plot to destroy his royal line. But there is one problem: Kyth's fighting skills are no match for the Kaddim.

To defeat the Kaddim, Kyth must rely on his bodyguard Kara, a beautiful Diamond-ranked assassin from the elite Majat Guild. But Kyth's enemies are smarter than he gives them credit for—and they develop an elaborate plan to remove Kara as an obstacle. Acting through treachery and scheming, they pitch Kara against the Majat, marking her as a target for the only warrior who can defeat her in battle. With the deadly assassin on their trail, Kythar and Kara must face impossible odds to save the kingdom and their lives.

Anna Kashina grew up in Russia and moved to the United States in 1994 after receiving her Ph.D. in cell biology from the Russian Academy of Sciences. She works as a biomedical researcher and combines career in science with her passion for writing. Anna's interests in ballroom dancing, world mythologies and folklore feed her high-level interest in martial arts of the Majat warriors. She lives in Philadelphia, Pennsylvania.

“Both Kyth and Ellah are likeable characters and it is a joy to follow their stories…A solid start to what looks to be an exciting series.”
– The British Fantasy Society

“If you’re in the mood for a fun fantasy with mercenaries, an evil brotherhood, then, yes, give Blades of the Old Empire a try.”
- Tenacious Reader

“Another great book from Angry Robot…I enjoyed this book and would recommend it for anyone who likes a good swashbuckling storyline.”
- Every Book Deserves to be Read

“Strong roots and parallels to history keep the reader grounded and enrich the world of this novel while magic and the characters keep it fresh and interest.”
- Heather McCorkle

“This book is action packed from the very first page, and is a good start to a series that I will look forward to reading more of.”
- Avid Reviews

“You get fast-paced travel with political intrigue and danger, amazing martial arts fights of extreme skill, cultural immersion from around the world, and a little hint of romance without ruining the tough fighter feel… I really cannot express enough times how highly I recommend this story to everyone.”
- In Pursuit of My Own Library

“I really enjoyed this book despite not being a huge fan of romance-themed novels. I feel it is for those who want more romance in their fantasy while also getting a hefty dose of action, adventure, and intrigue… It was a good book, and well worth the read. I’ll be reading this one again.”
- R.J. Blain

“Each scene is very well written. Action and dialog keep the story moving at a fast clip. The fight scenes were especially well written making it easy to see what was happening. Now I want to see what happens in the next book.”
- Mixed Book Bag

"Kashina's Arabesque novel ... will have readers dream of summoning their own djinn."
-Publishers Weekly