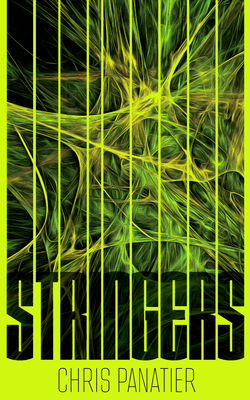 A genius is abducted by an alien bounty-hunter for the location of a powerful inter-dimensional object. Trouble is, he can’t remember a thing.

Ben isn’t exactly a genius, but he has an immense breadth of knowledge. Whether it’s natural science (specifically the intricacies of bug sex), or vintage timepieces, he can spout facts and information with the best of experts. He just can’t explain why he knows any of it. Another thing he knows is the location of the Chime. What it is or why it’s important, he can’t say.

But this knowledge is about to get him in a whole heap of trouble, as a trash-talking, flesh construct bounty hunter is on his tail and looking to sell him to the highest bidder. And being able to describe the mating habits of Brazilian bark lice won't be enough to get him out of it.

File Under:  Science Fiction [ Bloom of God | Patton you on the back | Eels Aplenty | Some Aliens Just Suck ]

Chris Panatier lives in Dallas, Texas, with his wife, daughter, and a fluctuating herd of animals resembling dogs (one is almost certainly a goat). He writes short stories and novels, “plays” the drums, and draws album covers for metal bands. Plays himself on twitter @chrisjpanatier.

"Delightfully smart, funny, fast-moving entertainment that really did make me laugh out loud."
– The Guardian

"Where Hitchhiker’s Guide to the Galaxy recommended towels, this slapstick and semisweet space opera sends its Earthlings out among the aliens armed only with a jar of pickles… Readers are in for a treat."
– Publishers Weekly, starred review

"Panatier combines humor, action, and a memorable cast of characters to deliver a read perfect for fans of Becky Chambers who appreciate a good fart joke and fans of Douglas Adams interested in considering serious moral quandaries in between chuckles."
– Booklist

"Many writers try to play it safe with the dreaded second novel. Many writers, but not all, as Chris Panatier took chances and delivered with his second book… Reminiscent of the well-loved Hitchhikers Guide To The Galaxy, Stringers delivers the laughs, with the jokes drawing on the author’s clear love affair with the grotesque, with poignant moments peppered throughout. A highly enjoyable read with moments of real emotional honesty that deserves to reach a wide audience."
– Gabriela Houston, author of The Second Bell

"Stringers is f*cking ridiculous in all the best ways. I haven't laughed this hard at anything EVER. In fact, to have this many laugh-out-loud moments should be illegal - there are nuggets of gold to be found on every page. Throw in a fun plot, characters who are rich and lively and incredibly funny in their own distinct ways, and a unique and engaging format (you'll see), and you've got yourself a joyous and exciting read. None of you are ready for this."
- Dan Hanks, author of Swashbucklers and Captain Moxley and the Embers of the Empire

"Panatier finds the sweet spot between the social satire of The Coming of the Great White Handkerchief and the pathos of the farting, tap dancing aliens of the planet Margo. A tour de ridicule!"
- R.W.W. Greene, author of Twenty-Five to Life and The Light Years

"Wholly original. Ridiculously brilliant. Panatier’s Stringers is filled with genuine characters, mind-boggling humor, and the raw and hysterical emotions of beings plucked from obscurity, sold to the highest bidders, and used to serve Universe altering purposes. Panatier’s unconventional storytelling, combined with poetic sentences and a plethora of bug facts you never knew you needed, will keep you entertained until the very end. I can’t recommend enough."
–Noelle Salazar, author of The Flight Girls

"In a universe of sci-fi novels, Chris Panatier's Stringers inhabits a galaxy all its own. Equal parts hilarious, inventive, and action-packed, this absolute gem of a book delivers a riveting, poignant plot full of flawed, lovable characters. Come for the bug sex, stay for the jar of pickles."
– Ron Walters author of Deep Dive

“Panatier’s latest book is a riotous, interdimensional adventure with heart. Zany and erudite, Stringers reads like an SMBC comic that swallowed a whole series of Red Dwarf, veering from the unabashedly puerile to the profound by way of esoterica and galactic hijinks. With bug facts galore and a truly memorable jar of pickles, it has all the makings of a cult favourite. Panatier is one to watch.”
– Calder Szewczak, author of The Offset

“The fascinating characters are sure to keep the reader’s attention.”
– Publishers Weekly

“If you like your dystopian futures with a twist, then The Phlebotomist is the story for you. Highly recommended.”
– British Fantasy Society

“A clever, inventive fantasy with a horrific twist that explores whether we are more than the sum of our parts.”
– Tal Klein, author of The Punch Escrow

“Panatier’s world – wracked by war and held together by weary patriotism – seems all too close at hand, and his characters are as real as your next-door neighbors. His unlikely hero, Willa Wallace, takes on mankind’s oldest foes – poverty, prejudice, greed, and things more calculating and predatory – in this exciting and genre-challenging debut from Angry Robot Books. ”
–  R.W.W. Greene author of The Light Years

“With The Phlebotomist, Panatier has created a unique, intricately imagined vision of a divided society, where cash-for-blood is a booming trade and society is split by government sanctioned exsanguination. Rich, bold and visceral, this is a layered, post-apocalyptic book you won’t escape from easily, and one which left me genuinely squirming in my seat.”
– Gemma Amor, Bram Stoker Award nominated author of Dear Laura and White Pines

“A compelling dystopian thriller that presents a fallen world and proceeds to dissect it with sanguine enthusiasm using its refreshingly unconventional heroes.”
– Indrapramit Das, author of The Devourers

“A terrifying tale of governmental manipulation and control, set against the kind of global health crisis that used to be a futuristic “what if” but is now very much a “what might be”… equal parts fascinating and horrifying, and never not entertaining.”
– Dan Hanks, author of Captain Moxley and the Embers of the Empire

“In The Phlebotomist, Chris Panatier gives us the unlikely female protagonists—a plucky grandmother, a tech-geek locksmith, and a teenager with swords—we didn’t know we needed, and sets them in a near-future world that terrifies because it feels so possible. Nuclear disaster? Check. Constant monitoring by Big Brother? Uh-huh. Invasion of both men’s and women’s bodies for the Common Good? That, too. At once grounded in legit science, and also so totally imaginative that you have to find out what happens next, this book will take root at the base of your brain, threading its tentacles into your spinal cord and requiring you to keep turning pages until the bloody end.”
– Jessica Hagemann, author of Headcheese

“Chris Panatier knocks it out of the park with The Phlebotomist. A post-apocalyptic science fiction novel that–for once–doesn’t include a love triangle, a trio of moody teens, or zombies. Amazing, right?”
– Sci Fi & Scary