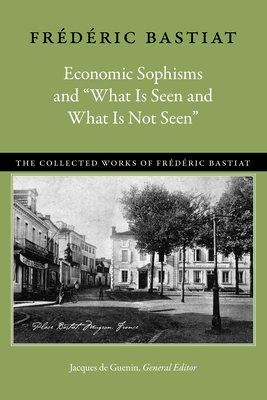 This is book number 3 in the Collected Works of Frederic Bastiat series.

This volume, the third in our Collected Works of Fr d ric Bastiat, includes two of Bastiat's best-known works, the collected Economic Sophisms and the pamphlet What Is Seen and What Is Not Seen. We are publishing here for the first time in English the Third Series of Economic Sophisms, which Bastiat had planned but died before he could complete the project.

Both Economic Sophisms and What Is Seen and What Is Not Seen share similar stylistic features and were written with much the same purpose in mind, to disabuse people of misperceptions they might have had about the benefits of free trade and free markets. Throughout the book, Bastiat's clever and witty arguments against tariff protection and subsidies to domestic industry are timeless, as governments and vested-interest groups are still advocating the same policies 160 years after Bastiat wrote.

Fr d ric Bastiat was born in 1801, and during his short life (he died in Rome, on Christmas Eve, in 1850) he was witness to many historic events, such as the victory of Richard Cobden's free-trade Anti-Corn Law League in 1846, the rise of socialism, the 1848 Revolution, and the rise of Louis Napol on to the presidency of the Second Republic. Many of these events affected his ideas and became targets of his writings. In his final work, What Is Seen and What Is Not Seen, completed only months before his death, he provides one of his keenest economic insights, that, although there are obvious beneficial effects of government interventions at first, that is, the "seen," there are also the "unseen" consequences, for example, in the form of opportunity costs that are ignored but that often have deleterious economic effects. He makes this case most eloquently in the form of a parable in the opening chapter, "The Broken Window."

To accompany Bastiat's original works, we have provided detailed and comprehensive explanatory footnotes, glossaries, and appendixes. Bastiat refers to dozens of other writers and politicians and is critical of French government policies regarding taxation, tariffs, and subsidies to business. The glossary of authors and politicians provides detailed information about the individuals Bastiat mentions in his essays, the views they held, the books they published, and the laws that the French state enacted in order to maintain the system of protection and subsidies that Bastiat and the other free-market economists so strenuously opposed. This collection of supplementary material allows us a better understanding of the community of economists and politicians of which Bastiat was a part in the late 1840s.

Dennis O'Keeffe was Professor of Social Science at the University of Buckingham and Senior Research Fellow in Education at the Institute of Economic Affairs, London.

Jean-Claude Paul-Dejean is a Bastiat scholar and a historian at the University of Bordeaux.

David M. Hart has a Ph.D. in history from King's College, Cambridge, and is the Director of Liberty Fund's Online Library of Liberty.