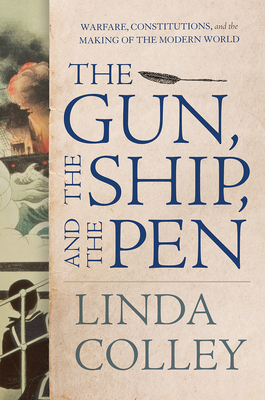 Constitutions have a complex and wild history, one that spans the globe. As the world came together and fought like never before things had to change. Colley transports us to the moments fascinating characters put ink to paper and how they inspired each other. — From Drew's Picks

Best Books of the Year: Financial Times, The Economist

Book of the Year: The Leaflet (International Forum on the Future of Constitutionalism)

Longlisted for the Cundill History Prize

Profiled in The New Yorker

Vivid and magisterial, The Gun, the Ship, and the Pen reconfigures the rise of a modern world through the advent and spread of written constitutions.

A work of extraordinary range and striking originality, The Gun, the Ship, and the Pen traces the global history of written constitutions from the 1750s to the twentieth century, modifying accepted narratives and uncovering the close connections between the making of constitutions and the making of war. In the process, Linda Colley both reappraises famous constitutions and recovers those that have been marginalized but were central to the rise of a modern world.

She brings to the fore neglected sites, such as Corsica, with its pioneering constitution of 1755, and tiny Pitcairn Island in the Pacific, the first place on the globe permanently to enfranchise women. She highlights the role of unexpected players, such as Catherine the Great of Russia, who was experimenting with constitutional techniques with her enlightened Nakaz decades before the Founding Fathers framed the American constitution. Written constitutions are usually examined in relation to individual states, but Colley focuses on how they crossed boundaries, spreading into six continents by 1918 and aiding the rise of empires as well as nations. She also illumines their place not simply in law and politics but also in wider cultural histories, and their intimate connections with print, literary creativity, and the rise of the novel.

Colley shows how—while advancing epic revolutions and enfranchising white males—constitutions frequently served over the long nineteenth century to marginalize indigenous people, exclude women and people of color, and expropriate land. Simultaneously, though, she investigates how these devices were adapted by peoples and activists outside the West seeking to resist European and American power. She describes how Tunisia generated the first modern Islamic constitution in 1861, quickly suppressed, but an influence still on the Arab Spring; how Africanus Horton of Sierra Leone—inspired by the American Civil War—devised plans for self-governing nations in West Africa; and how Japan’s Meiji constitution of 1889 came to compete with Western constitutionalism as a model for Indian, Chinese, and Ottoman nationalists and reformers.

Vividly written and handsomely illustrated, The Gun, the Ship, and the Pen is an absorbing work that—with its pageant of formative wars, powerful leaders, visionary lawmakers and committed rebels—retells the story of constitutional government and the evolution of ideas of what it means to be modern.

A professor of history at Princeton, Linda Colley is the author of books including Britons, winner of the Wolfson Prize, and The Ordeal of Elizabeth Marsh, a New York Times Best Book of the Year. She lives in Princeton, New Jersey.

If there were a Nobel Prize in History, Colley would be my nominee… An incandescent, paradigm-shifting new book.
— Jill Lepore - The New Yorker

[A] dazzling global history... pulling away the blinkers of national stories, widening the focus, and showing--as the current pandemic has done--how interconnected all our lives and interests are... Bold... Abounds with subtle arguments grounded in expertly marshaled sources, generously acknowledged. But perhaps the book's most impressive aspect is its mobility, felt not only in the fluid narratives but in the movement of constitutional ideas themselves.
— Jenny Uglow - New York Review of Books

A wide-ranging, beautifully written global history... Colley’s narrative is rich, and she emphasizes the colorful characters who have contributed to constitution-making projects around the world.
— Tom Ginsburg - Washington Post

A helpful contribution to this growing field.... Colley’s work echoes that of the great scholar of nationalism, Benedict Anderson.... Interestingly, Colley shows that early constitutions were not simply the result of demands from below.... The Gun, the Ship, and the Pen has important lessons for anyone interested in political development today.

Dazzling.... Colley conducts a vivid worldwide tour of 'a contagious political genre'.... The result is one of the most enthralling, illuminating and inspiring works of global history in decades.... The Gun, the Ship, and the Pen proves that the history of constitutions is too important to be left to constitutional lawyers. This is a big book in every sense: vast in scope, broad in ambition, and rich in stories, convergences and insights.

Colley writes with such elegance and verve that the journey, and the characters it involves, are always fascinatingly worthwhile. This is an original global history that adds to readers’ understanding of the world they live in..... The Gun, the Ship and the Pen is an ambitiously wide-ranging account of the forces that propelled the writing of constitutions – documents that have defined the modern world – from the middle of the 18th century to today.

[A] terrific new global history of constitutions.... [of] many captivating stories.... Colley has produced a brilliant world history. The Gun, the Ship and the Pen is a compelling and stylish corrective to any notion that constitutions are a somnolent backwater devoid of drama and historical significance.

No one can accuse Linda Colley of shying away from big subjects. This one is as big as they come — nothing less than an exploration of the origin of written constitutions.... The Gun, the Ship and the Pen is a remarkable feat of scholarship on an international scale.... [There are] many insights in this impressive book.

As a piece of historical thinking, argument and writing, it is magisterial by every criterion, the most impressive outcome, thus far, of what has already been a career of great creativity. It is a measure, equally, of how the discipline of history has changed over the past twenty years.
— Richard Drayton - Times Literary Supplement

One of our most imaginative and relevant historians... Colley takes you on intellectual journeys you wouldn’t think to take on your own.
— David Aaronovitch - The Times

In Linda Colley's new book, constitutions fizzle with the energy of war, navigation and power.... She avoids the idea that these documents are gifted to the people by elites.... This fascinating global history shows that while constitutions are surrounded by an ocean of competing interests and violence, read together they tell a tale of how interconnected the story of political hope has always been.
— Peter Chappell - Prospect

Fascinating and important... Colley’s wide-ranging survey covers many aspects of the global impact of constitutions, from the crucial importance of printers and publishers, to Thomas Paine’s interest in putting political and legal concepts on paper, to Toussaint Louverture defying the French in 1801 and publishing his own constitution for a future Black-ruled Haiti... This carefully crafted exploration shows how constitutions have helped to bring about an extraordinary revolution in human behavior, ideas and beliefs over the years. Though constitutions are flawed, Colley writes, 'in an imperfect, uncertain, shifting, and violent world, they may be the best we can hope for.'
— Roger Bishop - Bookpage

Copiously researched and elegantly written, Colley’s treatise goes beyond the usual Anglo-American focus of constitutional history to show the global impact of the constitutionalist movement. The result is a fresh and illuminating take on these still-living documents.
— Publishers Weekly