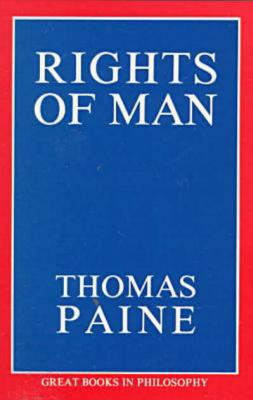 Written in part as a theoretical reply to the stodgy conservatism of Edmund Burke's Reflections on the French Revolution (1790), Paine's Rights of Man (1791-92) sets forth a manifesto of popular democratic rule in the established tradition of John Locke and Jean-Jacques Rousseau. In it Paine offers a discussion of the nature of political man and proceeds to encourage the grass-roots revolutionary movements that seek to analyze critically and, where necessary, reform or replace social and political institutions, many of which tend only to repress those whom they were initially designed to serve.

Paine's enthusiasm, courage, and boundless commitment to reason are the intellectual rapiers that strike impressive blows for the defense of freedom and for the self-determination of all persons. His dedication to liberty is not so blind as to endorse reform uncritically.

In Part II of Rights of Man Paine does set himself against those who would rebel for the mere sake of rebellion. Revolution must contain within its being not only the displacement of the previous regime but also a rationally formulated alternative that will meet the needs of the people.

THOMAS PAINE was born in Thetford, England, on January 29, 1737. He was forced to leave school early to enter his father's trade of stay-making; but Paine rejected this and, following unsatisfying attempts at several other professions, he emigrated to the American colonies, arriving in Philadelphia in November 1774. On Benjamin Franklin's recommendation, Paine was hired for six months as managing editor of the Pennsylvania Magazine, to which he contributed various poems and essays.

During this time of growing dissent within the colonies, Paine first called for a reconciliation with England; however, after the battles of Lexington and Concord in 1775, he became a tireless propagandist for separation and, in January 1776, published his pamphlet Common Sense. This work, which was first published anonymously, and his American Crisis exercised a profound influ­ence on public opinion and morale.

Following the War of Independence Paine returned to England where he was welcomed as a celebrity; the accolades soon ceased, however, with the publication of the Rights of Man (1791), a defense of the French Revolution meant to be a reply to Edmund Burke's Reflections on the Revolution in France. Forced to leave England due to the public outcry his book had occasioned, Paine traveled to France, where he was granted citizenship. However, after he spoke out in defense of the deposed king Louis XVI, Paine was im­prisoned in 1793 and nearly executed. While in prison, Paine began composing his statement of religious belief, The Age of Reason. Although pilloried as a declaration of atheism, The Age of Reason actually espoused deism: Paine rejected the inerrancy of the Bible and disputed revelation. The God who had created the universe had given humankind the gift of reason which it would apply to the management of its own affairs and the discovery of the physical universe.

Paine returned to the United States in 1802; while welcomed by President Thomas Jefferson, the former champion of liberty was ostracized by many as that "outrageous blasphemer." Never­theless, the influence of The Age of Reason began to grow as the nineteenth century progressed and freethought challenged out­dated religious beliefs.