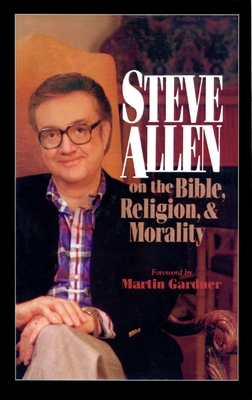 America's dean of intelligent comedy doesn't think the Bible is a laughing matter. His good look at the good book is a closely reasoned examination of Scripture, designed to encourage rational analysis of the most influential document of Western civilization. Although the Bible has been consulted for more than twenty centuries, Allen asserts that there remains an extensive degree of common ignorance about it. Noting that most people today rarely read the Bible, Allen is convinced that the millions who do read it are not able to understand certain passages at all.

Steve Allen on the Bible, Religion, and Morality took form when Allen began his own exploration of the Bible, marking passages that struck him as extraordinarily beautiful, or those that were profoundly confusing. Spellbound by the very mystery of it, he perceived that much of the text leads directly to controversy. And, he urges, it is of greater importance now than ever before that all Americans be conversant with the Bible, partly because of those who would use Scriptures as a weapon to force their views on others.

Allen presents his ideas as a series of alphabetically arranged essays on characters, events, and books of the Scriptures, as well as on such controversial topics as abortion, anti-Semitism, capital punishment, death, evolution, and original sin. He draws on the expertise of biblical scholars, theologians, and philosophers to demonstrate that fundamentalist assumptions about the reliability and authenticity of the Bible as the inviolable Word of God simply have no rational or factual basis.

Allen highlights the errors, inconsistencies, and self-contradictions of the Bible. While not denying the value of many biblical passages, he argues that Americans can and should critique the Bible as they would any other historical document.

While Allen finds much in the Bible with which one can take issue, his examination also reveals that much is meaningful. Allen's goal - to make people think reasonably about Scripture - is achieved through remarkable clear, readable, and insightful prose.

Steve Allen (1921-2000) was known as television's renaissance man. He authored more than fifty books and composed over 8,500 songs. Allen was the creator and original host of the Tonight Show and the award-winning PBS series Meeting of Minds. You can learn more about this legendary entertainer by visiting his official Web site at SteveAllenonline.com.
My Account • Sign In • Sign Out • Register
NEW & USED BOOKS
AUTHOR EVENTS • GIFTS
Tempe
6428 South McClintock Drive
480.730.0205
[Google Map]
Sunday-Friday 10am-8pm • Saturday 9am-8pm
Trade Counter 11am-6pm daily