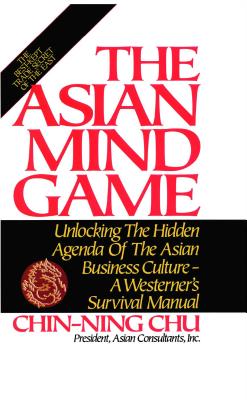 This book, by East-West marketing consultant Chin-ning Chu, is must reading for any Westerner in business, government, or academia who negotiates in the Orient or wants to.
It is the first to reveal to Westerners the deep secrets of the Asian psyche that influence Asian behavior in business, politics, lifestyle, and battle.
Ms. Chu points out that Asian mind games have become so finely tuned over the centuries that Americans seldom realize that Asians view the marketplace (and by extension, the world) as a battlefield, and act accordingly.
She has extracted the principles of successful negotiations from centuries-old Chinese texts that have influenced all of Asia, and provides her readers with examples of their application in the modern world.
In the Western world, the ability to formulate cunning and subtle strategies for getting your own way in business, politics, and everyday life is regarded as a matter of intuition. In Asia, however, strategic thinking is a formal discipline studied by people from all walks of life. Amazing as it may seem, contemporary Asians base their outlook and behavior on the teachings of the ancients. In China, even children are familiar with the "36 Strategies," formulated by Sun Tzu, a famous military strategist, in the fourth century B.C.
Throughout Asia today, business people as well as political figures study Sun Tzu's Art of War and apply its strategies to all their activities, while Americans read The One-Minute Manager and All I Really Need to Know I Learned In Kindergarten. No wonder, Ms. Chu comments, that when it comes to business and political negotiations, the Chinese refer to Americans with a word that means "innocent children."
Ms. Chu brilliantly analyses how Chinese thought and culture have affected Japan, Korea, and Taiwan, and how Japanese conquest and culture have had their effect on the rest of Asia.
With United States trade and political alliances shifting increasingly to the Pacific rim, it becomes ever more urgent to understand the Asian mind. Ms. Chu, born in China and educated in Taiwan, spells out the makeup of the Asian psyche as no Westerner could.

Chin-Ning Chu is president of Asian Marketing Consultants, Inc. She counsels Western companies doing or wishing to do business in Asia. Born in Teinjin, near Beijing, she was raised in Taiwan after the fall of mainland China to the Communists. She has studied the teachings of sages in India, China, and Europe and believes her study of philosophy and psychology provides her with a powerful tool with which to examine the complexities of philosophical, sociological, and historical influences on the shaping of the modern Asian mind. Ms. Chu lives in Beaverton, Oregon.

John Hillkirk USA Today: coauthor of Grit, guts and Genius; and Xerox: American Samurai. Western business people often are at an enormous disadvantage because they don't understand Eastern philosophy or strategy. Chin-ning Chu's book is a fascinating and revealing look at the Asian mind-set. Every manager doing business in the Far East -- or negotiating with Asian executives -- could learn from this book.