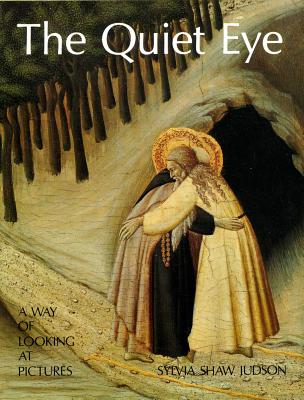 The Quiet Eye is a book of great charm, imbued with a love and understanding of art that speaks directly to the heart.

The thirty-three pictures selected by the American sculptress Sylvia Shaw Judson cover a wide spectrum of subjects and styles, from the seventh century to the modern day. They include works by artists ranging from Durer and Brueghel to Rousseau and Klee, pottery and sculpture from ancient Greece, Oriental scrolls and wall paintings, and are accompanied by quotations from Plato and Shakespeare to Wordsworth and Walt Whitman.

In making her choice, Sylvia Judson's intention was "to communicate a sense of affirmation, of wonder, of trust. This is a spirit alien to much of the art of our insecure time, but one which I am confident will some day return."

The Quiet Eye was first published as a large format art book in 1954, when it won immediate acclaim. The 1982 edition features a more convenient size and some color images that were originally published in black and white.

Sylvia Shaw Judson was a Quaker and a sculptress of considerable note. Encouraged by her father, an architect, she trained at the Chicago Art Institute and under Bourdelle in Paris. Most of her sculpture was designed for particular locations, and is to be seen in parks, schools, churches, and hospitals throughout America. Two of her best known works are the monument to the Quaker Mary Dyer in front of the Boston State House, and The Little Gardener which was bought by Jacqueline Kennedy for the Rose Garden of the White House. A book of her sculpture, For Gardens and Other Places, was published in 1965. She died in 1978.