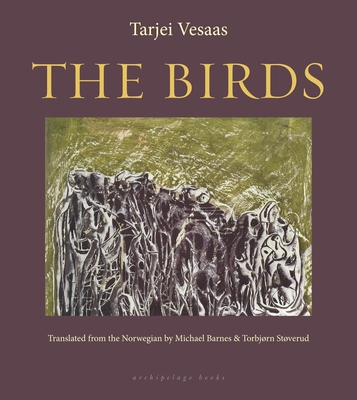 “Tarjei Vesaas has written the best Norwegian novel ever, The Birds— it is absolutely wonderful, the prose is so simple and so subtle, and the story is so moving that it would have been counted amongst the great classics from the last century if it had been written in one of the major languages.”  — Karl Ove Knausgaard

The Birds tells the story of Mattis, a deeply sensitive, intellectually disabled young man living in a small house in the Norwegian countryside with his sister Hege. Eking out a modest living knitting sweaters, Hege encourages her brother to find work to ease their financial burdens, but his attempts come to nothing.

When he finally sets himself up as a  ferryman, the only passenger he manages to bring across the lake is a lumberjack, Jørgen. But when Jørgen and Hege become lovers, Mattis finds the safety of his familial life threatened and his jealousy quickly spirals.

In The Birds, Norway’s most celebrated writer of the twentieth century allows us to rediscover the world. By turns frightening, beautiful, confounding, and full of mystery, it is a world we come to see more vividly through Mattis’s eyes.

TARJEI VESAAS (1897-1970), author of twenty-five novels, and several volumes of poetry, short stories, and plays, is widely regarded as one of Norway's greatest writers of the twentieth century. His writing touches on a variety of difficult themes such as mortality, guilt, and angst, while often chronicling the deep intractable human emotions of his characters. Vesaas won a number of awards, including the the prestigious Nordic Council's Literature Prize in 1963 for his novel, The Ice Palace, and The Venice Prize in 1953 for The Winds. He was considered for the Nobel Prize three times.

“Tarjei Vesaas has written the best Norwegian novel ever, The Birds—it is absolutely wonderful, the prose is so simple and so subtle, and the story is so moving that it would have been counted amongst the great classics from the last century if it had been written in one of the major languages.” —Karl Ove Knausgaard, author of My Struggle, in the New York Times Book Review

“[The Birds] has a freshness that can only be due to its timeless subject matter . . . From the first page, this novel grips us with an acutely sensitive rendition of a mentally handicapped man's inner world.” —Kirkus Reviews

“Mattis, the protagonist of . . . The Birds, surely deserves a place among the cadre of unforgettable characters in modern literature . . . Vesaas’s prose, spare and straightforward, soars with a poignancy of feeling . . . Mattis’s disability is the pivot upon which the novel unfolds and also serves to amplify the ways that “normal” people, too, are “handicapped.” Vesaas allows us see that without Mattis’s sensitivity, perceptivity, and honesty, we, too, are impaired, limited from living a full life.” —Lori Feathers, World Literature Today

“...an under-appreciated work of genius.” —The National Book Review

“Archipelago’s recent edition of The Birds (1957), one of Vesaas’s masterpieces, is an excellent opportunity for English readers to become acquainted with his work.” —Reading in Translation

“A spare, icily humane story . . . The character of Mattis, absurd and boastful, but also sweet, pathetic and even funny, is shown with great insight. The translation conveys successfully a concetration of style and feeling that seems to be Vesaas’ characteristic mark as a novelist.” —Sunday Times

“The Birds is a true literary masterpiece—most likely one of the most beautifully haunting novels you will ever read.” —Nordic Bookblog

“The inexplicable thoughts that recur to Mattis will do so to readers as well, long after the book has ended.” —Hannah Sheldon-Dean, Bookslut

“A powerful book, [The Birds] wounds you . . . Its complexity is rendered with the simplicity of poetic beauty that only a true poet such as Vesaas could pull off. I guarantee you, you will never recover.” —Chris Via of Leaf by Leaf