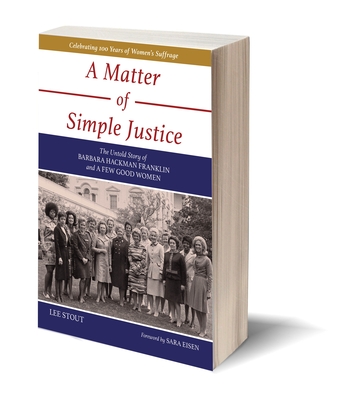 By Lee Stout
Email or call for price

In August 1972, Newsweek proclaimed that "the person in Washington who has done the most for the women's movement may be Richard Nixon." Today, opinions of the Nixon administration are strongly colored by foreign policy successes and the Watergate debacle. Its accomplishments in advancing the role of women in government have been largely forgotten. Based on the "A Few Good Women" oral history project at the Penn State University Libraries, A Matter of Simple Justice illuminates the administration's groundbreaking efforts to expand the role of women--and the long-term consequences for women in the American workplace.

At the forefront of these efforts was Barbara Hackman Franklin, a staff assistant to the president who was hired to recruit more women into the upper levels of the federal government. Franklin, at the direction of President Nixon, White House counselor Robert Finch, and personnel director Fred Malek, became the administration's de facto spokesperson on women's issues. She helped bring more than one hundred women into executive positions in the government and created a talent bank of more than a thousand names of qualified women. The Nixon administration expanded the numbers of women on presidential commissions and boards, changed civil service rules to open thousands more federal jobs to women, and expanded enforcement of antidiscrimination laws to include gender discrimination. Also during this time, Congress approved the Equal Rights Amendment and Nixon signed Title IX of the Education Amendments into law.

Featuring a new forward by Sara Eisen, this updated edition of A Matter of Simple Justice celebrates the 100th anniversary of women's suffrage in the United States through the story of Barbara Hackman Franklin and those "few good women" and shows how the advances that were made in this time by a Republican presidency both reflected the national debate over the role of women in society and took major steps toward equality in the workplace for women.

Lee Stout is Librarian Emeritus at the Penn State University Libraries, author of Ice Cream U, and coauthor of Lair of the Lion, both also available from PSU Press.