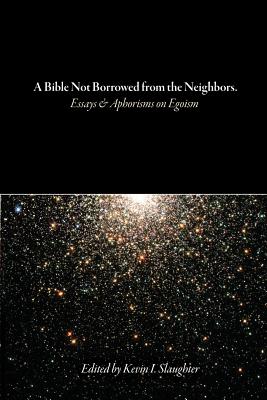 Underworld Amusements has released a compilation of Essays and Aphorisms on Egoism, edited by Kevin I. Slaughter. The writings collected here are from the contemporaries of Ragnar Redbeard, radical thinkers who went against the herd with all their might. They upheld themselves as Gods, all other concerns come after that.
Blasphemous, mocking and visceral, they are the children of Nietzsche, Stirner and Thoreau. Though often overlapping with Anarchists, they are too individualistic for many modern anarchists who are often just Socialist-minded egalitarian Utopians.
Contents
DEFINITION
Definitions of Egoism & Altruism THE PHILOSOPHY OF EGOISM
The Philosophy of Egoism
-James L. Walker
Biographical Sketch of James L. Walker
-Henry Replogle QUOTES, APHORISMS, MAXIMS
Testimony of the Apostles of Egoism
Egoism as Taught by Thoreau
Via Hellorosa
The Eagle & The Serpent
Wisdom & Wickedness of La Rochefoucauld
Wisdom & Wickedness of Chamfort
Flashes of Lightning from Nietzsche ESSAYS, EPISTLES, ASSAULTS
Nietzsche on Atheism, Pessimism, Schopenhauer
-Translated by Thomas Common
Darwinism In Sociology: A Reply to Nietzsche's Critics.
-Thomas Common
The Land of the Altruists: A Parable for the Infant Class.
-John Beverley Robinson
Why Women Need Egoism
-Fraulein Lepper
An Apppreciation of Stirner
-John Henry Mackay
That Blessed Word Altruism
-John Erwin McCall
Aeschylus at Marathon: Are We Saved by Love or by Hate?
-John Erwin McCall
The Religion of Egoism: A Prayer for More Bitterness. -John Erwin McCall