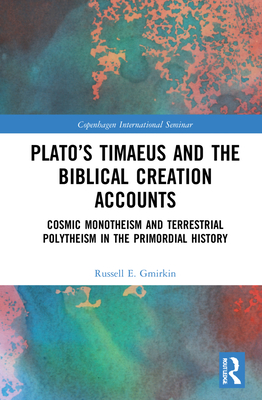 By Russell E. Gmirkin
Email or call for price

Plato's Timaeus and the Biblical Creation Accounts argues that the creation of the world in Genesis 1 and the story of the first humans in Genesis 2-3 both draw directly on Plato's famous account of the origins of the universe, mortal life and evil containing equal parts science, theology and myth.

This book is the first to systematically compare biblical, Ancient Near Eastern and Greek creation accounts and to show that Genesis 1-3 is heavily indebted to Plato's Timaeus and other cosmogonies by Greek natural philosophers. It argues that the idea of a monotheistic cosmic god was first introduced in Genesis 1 under the influence of Plato's philosophy, and that this cosmic Creator was originally distinct from the lesser terrestrial gods, including Yahweh, who appear elsewhere in Genesis. It shows the use of Plato's Critias, the sequel to Timaeus, in the stories about the Garden of Eden, the intermarriage of "the sons of God" and the daughters of men, and the biblical flood. This book confirms the late date and Hellenistic background of Genesis 1-11, drawing on Plato's writings and other Greek sources found at the Great Library of Alexandria.

This study provides a fascinating approach to Genesis that will interest students and scholars in both biblical and classical studies, philosophy and creation narratives.

Russell E. Gmirkin is an independent researcher specializing in Greek sources used in the Hebrew Bible. He is best known for his 2006 book Berossus and Genesis, Manetho and Exodus and his 2017 book Plato and the Creation of the Hebrew Bible.