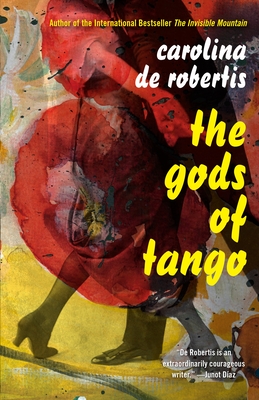 By Carolina De Robertis
$16.00
Not Available In-Store - Usually Ships from Warehouse in 1-5 Days

Arriving in Buenos Aires in 1913, with only a suitcase and her father’s cherished violin to her name, seventeen-year-old Leda is shocked to find that the husband she has travelled across an ocean to reach is dead. Unable to return home, alone, and on the brink of destitution, she finds herself seduced by the tango, the dance that underscores every aspect of life in her new city. Knowing that she can never play in public as a woman, Leda disguises herself as a young man to join a troupe of musicians. In the illicit, scandalous world of brothels and cabarets, the line between Leda and her disguise begins to blur, and forbidden longings that she has long kept suppressed are realized for the first time. Powerfully sensual, The Gods of Tango is an erotically charged story of music, passion, and the quest for an authentic life against the odds.

Carolina De Robertis, a writer of Uruguayan origins, is the author of two previous novels, Perla and The Invisible Mountain (a Best Book of 2009 according to the San Francisco Chronicle; O, The Oprah Magazine; and Booklist), and the recipient of Italy’s Rhegium Julii Prize and a 2012 fellowship from the National Endowment for the Arts. Her writings and literary translations have appeared in Zoetrope: All-Story, Granta, The Virginia Quarterly Review, the anthology Immigrant Voices, and elsewhere. Her novels have been translated into seventeen languages. She lives in Oakland, California.

Winner of the Stonewall Book Award

“Bold and mesmerizing. . . . Woven of many strands, the novel is absorbing, tightly crafted. . . . Passages hum in step with the tempos of the tango, seducing the reader to continue turning the pages.” —Los Angeles Review of Books

“[De Robertis] is a natural storyteller. . . . The book’s relentlessly propulsive story of gender-switching in a perilous time . . . keep us rapt, turning the pages.” —The Washington Post

“[The tango is] a sound charged with the attitude and yearnings of Argentina’s immigrant class, its raw passions and unleashed frustrations. . . . De Robertis’s writing harnesses that physicality and sexual energy.” —The Wall Street Journal

“Like the dance from which it takes its title, The Gods of Tango is confident, sensual, wildly romantic.” —The Columbus Dispatch

“You think you’re reading one novel but, then, suddenly you realize you’re reading another. This is the dazzling transformation that slowly comes upon you reading Carolina De Robertis’s rapturous novel. . . . The Gods of Tango transforms the history of a frenetic musical genre, as the music itself transformed the lives of those who created it.” —Counterpunch

“Hypnotic. . . De Robertis’ passionate prose captures the rhythms of the tango, ensnaring us in its twists and twirls.” —The Seattle Times

“Beautifully realized . . . as evocative and textured as the tango itself. De Robertis deserves to share fans with the likes of Isabel Allende and Julia Alvarez, not just for creating similar settings but for masterly storytelling.” —Library Journal (starred)

“There is something inherently alluring about the tango. . . . [The Gods of Tango] captures that allure in a rich feast of history and human drama.” —Booklist (starred review)

“De Robertis has done the joyous and affirming work of reclaiming history in her novel.” —Lambda Literary

“A plea to embrace ‘the bright jagged thing you really are,’ and De Robertis captures the enormity of that struggle.” —Kirkus Reviews

“Atmospheric and fascinating…couldn’t be more topical: a great story of passion and gender.” —Omnivoracious (The Amazon Book Review)