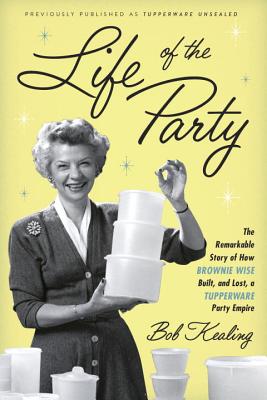 Before Mary Kay, Martha Stewart, and Joy Mangano, there was Brownie Wise, the charismatic Tupperware executive who converted postwar optimism into a record-breaking sales engine powered by American housewives. In Life of the Party, Bob Kealing offers the definitive portrait of Wise, a plucky businesswoman who divorced her alcoholic husband, started her own successful business, and eventually caught the eye of Tupperware inventor, Earl Tupper, whose plastic containers were collecting dust on store shelves.

The Tupperware Party that Wise popularized, a master-class in the soft sell, drove Tupperware's sales to soaring heights. It also gave minimally educated and economically invisible postwar women, including some African-American women, an acceptable outlet for making their own money for their families—and for being rewarded for their efforts. With the people skills of Dale Carnegie, the looks of Doris Day, and the magnetism of Eva Peron, Wise was as popular among her many devoted followers as she was among the press, and she become the first woman to appear on the cover of BusinessWeek in 1954. Then, at the height of her success, Wise's ascent ended as quickly as it began. Earl Tupper fired her under mysterious circumstances, wrote her out of Tupperware's success story, and left her with a pittance. He walked away with a fortune and she disappeared—until now.

Originally published as Tupperware Unsealed by the University Press of Florida in 2008—and optioned by Sony Pictures, with Sandra Bullock attached to star—this revised and updated edition is perfectly timed to take advantage of renewed interest in this long-overlooked American business icon.

Bob Kealing is an Edward R. Murrow and four-time Emmy award-winning broadcast journalist based in Orlando Florida at WESH-TV. He has appeared on national programs such as Dateline NBC, the Today Show, CBS This Morning, and has appeared as a guest on NPR, CNN, MSNBC, NBC and C-SPAN. The author of four non-fiction books, Kealing’s research led to the establishment of the Jack Kerouac House in Orlando, a literary landmark in the National Register of Historic Places, and Gram Parsons Derry Down, a Florida Heritage site honoring the pioneering country rock musician in his birthplace, Winter Haven.  Kealing lives north of Orlando with his wife, son and daughter.
My Account • Sign In • Sign Out • Register
NEW & USED BOOKS
AUTHOR EVENTS • GIFTS
Tempe
6428 South McClintock Drive
480.730.0205
[Google Map]
10am-7pm daily
Trade Counter 11am-6pm daily