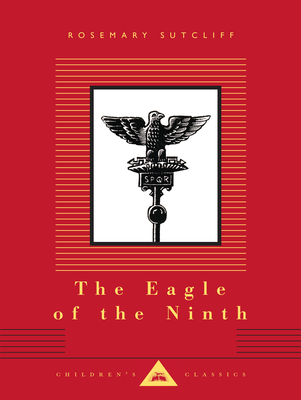 This indispensable classic, Rosemary Sutcliff's The Eagle of the Ninth--an adventure story that unfolds in Roman Britain, published in 1954--set the standard for all historical fiction for children that came after. EVERYMAN'S LIBRARY CHILDREN'S CLASSICS.

In the second century AD, the Ninth Legion marched into northern Britain to suppress a rebellion of the Caledonian tribes and was never heard from again. The young Roman officer Marcus Aquila sets off on a perilous journey to find out what happened to the legion in which his father served, and--if possible--to salvage its eagle and its honor. Accompanying him is Esca, his freed slave, with whom he gradually develops a deep and remarkable friendship that crosses the boundaries of conquest and colonialism. An unforgettable story of adventure, humanity, and the mysteries of the past.

ROSEMARY SUTCLIFF was born in Surrey, England, in 1920, the daughter of a British naval officer. She was the author of four works of nonfiction, an autobiography, four novels for adults, and more than fifty books for children, including the eight volumes of the Eagle of the Ninth series. Sutcliff won many literary awards, including the Carnegie Medal for The Lantern Bearers, and received an OBE and a CBE for her services to children's literature. She died in 1992.

CYRIL WALTER HODGES (1909-2004) was an English book illustrator at the height of a distinguished career in the 1950s and '60s when he illustrated some of Sutcliff's early works. Hodges was a leading scholar of the Elizabethan theater and himself the author of a number of books including Columbus Sails and Shakespeare's Theatre, which he also illustrated.

"For [readers] poised between Harry Potter and Tolkien, there really is nothing better than Sutcliff." --The New Yorker