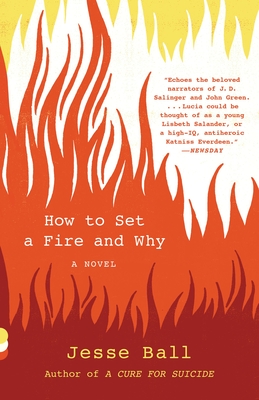 I did not merely read this book – I inhaled it. Like oxygen, it sustained me, each breath refreshing and sweet. Jesse Ball’s writing is quirky, intensely personal, and blazingly intelligent. Time and time again I was struck by the subtle brilliance of his prose, and I frequently found myself having to stop and reread an entire page just because I enjoyed it so much. Every sentence sparkles with the wit and energy of Lucia Stanton, a narrator who feels less like a character and more like a living breathing person, very real and very human. No matter how hard I tried, I couldn’t peel my attention away from her. Incandescent and incendiary, How to Set a Fire and Why is a truly outstanding novel, a work of rare insight and captivating charm. You won’t want it to end.

I did not merely read this book – I inhaled it. Like oxygen, it sustained me, each breath refreshing and sweet. Jesse Ball’s writing is quirky, intensely personal, and blazingly intelligent. Time and time again I was struck by the subtle brilliance of his prose, and I frequently found myself having to stop and reread an entire page just because I enjoyed it so much. Every sentence sparkles with the wit and energy of Lucia Stanton, a narrator who feels less like a character and more like a living breathing person, very real and very human. No matter how hard I tried, I couldn’t peel my attention away from her. Incandescent and incendiary, How to Set a Fire and Why is a truly outstanding novel, a work of rare insight and captivating charm. You won’t want it to end.

“On page one of Ball's new novel, 16-year-old Lucia Stanton gets kicked out of school for stabbing the star basketball player in the neck with a pencil. Lucia is a delinquent, a philosopher, a shard of glass. She's also an aspiring arsonist and an iconoclast, who is vibrant, alive, and charming in a misanthropic way. Ball's prose is precise and deceptively spare, his message dynamic in what he doesn't write. Enlightenment thinkers used the symbol of the flame to represent the power and transmission of knowledge. It's in this tradition that How to Set a Fire and Why becomes Ball's pyrotechnic masterpiece.”
— Matt Nixon (M), The Booksellers at Laurelwood, Memphis, TN

“Ball has created a voice that echoes the beloved narrators of J. D. Salinger and John Green. . . . With her tragic past, brilliant mind and subversive potential, Lucia could be thought of as a young Lisbeth Salander, or a high-IQ, antiheroic Katniss Everdeen, but with a better sense of humor.” —Newsday

Lucia Stanton’s father is dead, her mother is in a mental hospital, and she’s recently been kicked out of school—again. Living with her aunt in a garage-turned-bedroom, and armed with only a book, a Zippo lighter, and a pocketful of stolen licorice, she spends her days riding the bus to visit her mom and following the only rule that makes any sense: Don’t do things you aren’t proud of.

When Lucia discovers that her school has a secret Arson Club, her life is suddenly lit up; she’ll do anything to join. Edgy, raw, and hilarious, How to Set a Fire and Why is a thrilling story about growing up the hard way.

JESSE BALL (1978– ). Born in New York. The author of fourteen books, most recently the novel How to Set a Fire and Why. His works have been published to acclaim in many parts of the world and translated into more than a dozen languages. He is on the faculty at the School of the Art Institute of Chicago, won the 2008 Paris Review Plimpton Prize, was long-listed for the National Book Award, and has been a fellow of the NEA, Creative Capital, and the Guggenheim Foundation.

“A high-spirited, edgy coming-of-age novel… Ball has created a voice that echoes the beloved narrators of J.D. Salinger and John Green… With her tragic past, brilliant mind and subversive potential, Lucia could be thought of as a young Lisbeth Salander, or a high-IQ, antiheroic Katniss Everdeen, but with a better sense of humor… This is perfect summer reading.”
—Marion Wink, Newsday

“The most remarkable achievement of this novel is its narrative voice. It belongs to Lucia Stanton, the novel’s disaffected, Holden Caulfield-style young narrator and heroine. Lucia is a marvelous creation and the richness of her voice — its intelligence, its casual precision — is felt on the very first page…. Sometimes, you hear the ghost of Kazuo Ishiguro’s flat, chilly style. At other times… Borges-like parable cross-pollinates with Margaret Atwood-style dystopia.”
—Anthony Domestico, The Boston Globe

"How to Set a Fire and Why is a rare and startling work. Days after I read it, I find that I can't stop thinking about it, and what I've realized is that this is a book I will not forget. This is a harrowing, subtle, and absolutely electrifying novel."
—Emily St. John Mandel, bestselling author of Station Eleven

“Characterized by Ball's stand-out prose, this book will find you in the deepest places.”
—Bustle

“In Jesse Ball’s sixth novel—part thriller, part coming-of-age story—a teenager seeks escape through fire. . . . One of the triumphs of the novel is the delicacy with which Ball opens his narrator’s smart-aleck voice just wide enough to admit a sincere measure of wonder and dread. . . . Ball calls himself a fabulist but he is also a deeply moral writer, with a fine sense of tragedy. His view of the world might be described as tender nihilism. . . . Ball’s novels, despite their gamesmanship, eerie mysteries, and senseless acts of violence, are ultimately celebrations of compassion—our best hedge against suffering. . . . He poses an alternative vision of reality, filled with grand conspiracies united against oppressive systems of rule, Byzantine puzzles that can be solved with ingenuity, and romantic acts of heroism. His fiction is suffused with a melancholy that derives from the knowledge that the real world is indifferent to such elegant fantasies. . . . Ball invites his readers to join a secret confederacy that rejects modern life’s false parade of garbage. It is a confederacy that accepts the implacable demands of entropy and death but nevertheless seeks comfort in puzzle-solving, the exhilaration of a caper, and selfless acts of compassion.”
—Nathaniel Rich, The Atlantic

“Ball’s surreal novels… have made him into one of the most acclaimed experimental writers to come out of Chicago in years. Ball, who was just named a Guggenheim fellow, creates worlds that exist somewhere between the known and the unknown, the real and the absurd… His work has garnered attention… for its ingenious depictions of well-intentioned characters who must negotiate difficult mazes of tragedy and the unending tangles of unjust social systems…. Ball’s work is as spellbinding as it is daring.”
—Joe Meno, Chicago Magazine

« “In Ball’s latest imaginative and provocative novel, Lucia seizes her place among American literature’s brainy, questioning, besieged, and determined young female narrators…Ball’s pitch-perfect voicing is mesmerizing as Lucia chronicles her experiences to help her make sense of her predicament. A pithy, deadpan-funny, scalpel-sharp, and, beneath her flinty adolescent bravura, deeply compassionate observer, Lucia recounts her increasingly harrowing misadventures and presents a fiery manifesto… Readers will share Ball’s adoration of this incisive and valiant young survivor from whom life cruelly subtracts nearly everything but her incandescent intellect, blazing wit, and radiant sense of justice.”
—Donna Seaman, Booklist (STARRED review)

“Immediately intriguing… Lucia's curation of the truth is the only one the reader knows. Ball's convincing connection with what it is to be a teenager is aided by the fact that Lucia is atypical… Her peculiar brand of nonconformity remains true to the nature of teen… but she also has a level of erudition and knowing that allows for great insight… All that's written, all Lucia's actions and decisions, seem not just believable but somehow right…There's beauty in the simplicity, in the story that's told, in the plight of one girl to find what's true.”
—Emma Young, The Sydney Morning Herald

“Lucia is a seriously troubled teen girl, ready to burn it all to the ground, who has her world entirely changed when she discovers the Arson Club at her new school. Covering questions of morality, choice, and destruction, the novel hits a chord with the rebellious, feeling, overwhelmed teen in all of us.”
—Elena Sheppard, HelloGiggles

“Jesse Ball has written an unforgettably memorable character in the pyromaniac Lucia, who anyone who was once a cynical teenager will recognize and relate to.”
—Jarry Lee, Buzzfeed

« "The beautifully blunt narration of a gifted delinquent propels this excellent sixth novel…. Lucia details a philosophy that smartly parallels the novel's own—namely, that writing literature is, like arson, an act of creation and destruction…. Thrilling…. A song of teenage heartbreak sung with a movingly particular sadness, a mature meditation on how actually saying something, not just speaking, is what most makes a voice human."
—Publishers Weekly (STARRED and BOXED review)

“Told by a teenage protagonist who can’t manage to stay in school in spite of her knack for seeing straight through to the truth that underlies things. She’s a lovable misfit worth hanging out with.”
—Maddie Crum, The Huffington Post

“A troubled adolescent girl dreams of setting fire to the world. It starts with a stabbing and ends with a conflagration, and, in between, the novel never once telegraphs where it's going... It's never quite what you expected. In this stark epistolary novel, the author fully occupies the inner life of a teenage girl, Lucia Stanton… A brilliant portrayal of a girl who's quite aware of what she's going through.”
–Kirkus Reviews

“I was captivated from the first line.  Introducing the teenage narrator of Jesse Ball’s novel How to Set a Fire and Why: Lucia. Who can’t stay in high school, who lives in a converted garage with her broke and eccentric aunt, whose garden is boisterously weedy, whose mother is in a mental institution, whose father is dead, and who always tells the truth about what matters.  Lucia belongs with all the great child truth tellers: David Copperfield, Huck Finn, Holden Caulfield.  She has a rapier wit, an infallible nose for hypocrisy and injustice, and is always in trouble.  She is subversive and funny and has a capacity for love that outstrips her circumstances.  And she is much smarter than most of the plodding adults around her.  Her manifesto on arson read a little like parts of Walden.  I loved her and I loved the book, every page of it.”
—Peter Heller, bestselling author of The Dog Stars and The Painter

“If you didn’t know Ball’s off-kilter, engagingly experimental writing by the time 2014’s Silence Once Begun became a finalist for the Young Lions Fiction Award and the Los Angeles Times Book Prize, surely you started reading him when last year’s A Cure for Silence was long-listed for the National Book Award. And here’s another chance… Her father dead and her mother institutionalized, sharp-tongued, sharp-witted Lucia lives with her aunt and gets herself thrown out of school after school. At the latest one, she’s drawn to the secret Arson Club, a great place to meet like-minded teenagers, but you know it sounds bad.”
—Library Journal
My Account • Sign In • Sign Out • Register
NEW & USED BOOKS
AUTHOR EVENTS • GIFTS
Tempe
6428 South McClintock Drive
480.730.0205
[Google Map]
Sunday-Friday 10am-8pm
Saturday 9am-8pm
Trade Counter 11am-6pm daily