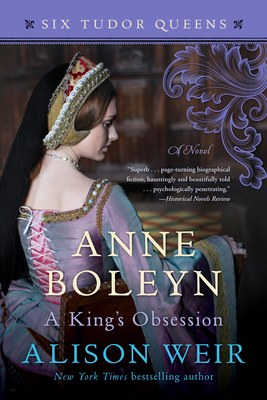 In this second novel of Alison Weir’s epic Six Tudor Queens series, the acclaimed author and historian weaves exciting new research into the story of Anne Boleyn, Henry VIII’s most infamous wife, a woman ahead of her time whose very life—and death—forever changed a nation.

Born into a noble English family, Anne is barely a teenager when she is sent from her family’s Hever Castle to serve at the royal court of the Netherlands. This strategic move on the part of her opportunistic father also becomes a chance for the girl to grow and discover herself. There, and later in France, Anne thrives, preferring to absorb the works of progressive writers rather than participate in courtly flirtations. She also begins to understand the inequalities and indignities suffered by her gender.

Anne isn’t completely inured to the longings of the heart, but her powerful family has ambitious plans for her future that override any wishes of her own. When the King of England himself, Henry VIII, asks Anne to be his mistress, she spurns his advances—reminding him that he is a married man who has already conducted an affair with her sister, Mary. Anne’s rejection only intensifies Henry’s pursuit, but in the absence of a male heir—and given an aging Queen Katherine—the opportunity to elevate and protect the Boleyn family, and to exact vengeance on her envious detractors, is too tempting for Anne to resist, even as it proves to be her undoing.

While history tells of how Anne Boleyn died, this compelling new novel reveals how fully she lived.

“A tragic, misrepresented figure, one of history’s original nasty women . . . Weir’s fictional Anne is ferociously smart and guilty of nothing but craving the power that's rightfully hers to claim.”—NPR

“One of historical fiction’s most compelling and exciting portraits of the enduringly fascinating and mysterious Anne Boleyn.”—Lancashire Evening Post

“As always, Weir demonstrates a keen eye for crafting dramatic scenes of beautiful, accurate detail, instilling in the reader a vivid sense of being there.”—Booklist

Alison Weir is the New York Times bestselling author of the novels Katherine of Aragon: The True Queen; The Marriage Game; A Dangerous Inheritance; Captive Queen; The Lady Elizabeth; and Innocent Traitor and numerous historical biographies, including The Lost Tudor Princess, Elizabeth of York, Mary Boleyn, The Lady in the Tower, Mistress of the Monarchy, Henry VIII, Eleanor of Aquitaine, The Life of Elizabeth I, and The Six Wives of Henry VIII. She lives in Surrey, England, with her husband.

“A persuasive attempt to restore the humanity of a tragic, misrepresented figure, one of history’s original nasty women . . . Weir’s fictional Anne is ferociously smart and guilty of nothing but craving the power that’s rightfully hers to claim.”—NPR

“This is a stunning, engaging, comprehensive and convincing novel. . . . Anne Boleyn: A King’s Obsession is important, page-turning biographical fiction, hauntingly and beautifully told in first-person narrative. It is psychologically penetrating and packed with wonderful, vivid scenes. [Alison] Weir’s characterisation is superb, and this complex novel will be, without doubt, one of the most admired works of historical fiction of 2017.”—Historical Novels Review

“One of historical fiction’s most compelling and exciting portraits of the enduringly fascinating and mysterious Anne Boleyn.”—Lancashire Evening Post

“This Anne is clever and clear-sighted. . . . Those sympathetic to Boleyn tend to stumble at her documented spite towards Katherine of Aragon and Mary Tudor, but Weir roots this bad behaviour in understandable insecurity as the King’s ardour for her wanes and the longed-for son does not arrive. This tale of Anne’s ascent and demise cannot escape comparisons with Hilary Mantel’s Wolf Hall series, which deals with the same events. Weir’s version [is] detailed, immaculately researched and convincing. She is particularly interesting on Anne’s probable exposure to early feminist writings.”—The Times (UK)

“[Weir] explores Anne’s influences and motivations, creating a multifaceted portrait of an ambitious woman who reluctantly accedes to Henry’s courtship and later acts out of desperation to protect herself and her daughter, Elizabeth. Even readers who know Anne’s story well should gain insights from this revealing novel.”—Booklist

“A richly detailed rendering of the familiar Tudor drama . . . Weir brings considerable expertise to her portrait of Anne as ‘a flawed but very human heroine, a woman of great ambition, idealism and courage’ . . . [and] vividly depicts court life.”—Kirkus Reviews

“A well-written and fast-paced novel that should appeal to fans of Tudor-era fiction looking for a fresh look at one of the period’s most popular protagonists . . . Weir’s Anne, an intellectual and ambitious woman highly interested in the latest thinking about both religion and women’s social roles, fits in well with the recent impulse in both scholarship and fiction to reclaim Anne from being portrayed as merely a manipulative temptress and cold-hearted homewrecker. Anne in the years before she catches Henry’s eye is particularly interesting.”—Library Journal

“A marvelous book—Anne comes alive and leaps from the page, fascinating, enthralling, full blooded—you can’t help but fall in love with her. A brilliant evocation of the period and a knife-edge moment in British history. Wonderful.”—Kate Williams, author of Becoming Queen Victoria