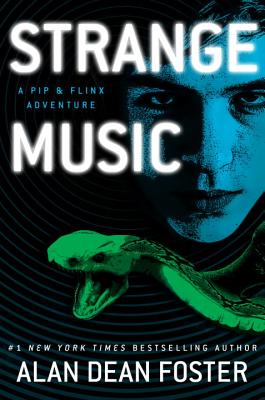 This is book number 15 in the Adventures of Pip & Flinx series.

Unlikely duo Pip and Flinx return to right another wrong in this all-new sci-fi adventure from one of the genre’s living legends.

The unexpected return of an old friend draws Flinx and Pip to the backward planet of Largess, whose seal-like denizens’ primitive technology and fractious clan politics have kept a wary Commonwealth from a profitable trade relationship. But now a rogue human employing forbidden advanced weaponry threatens to ignite a war among the Larians. And Flinx is just the man to stop it before it starts.

But once on Largess, Flinx discovers that his empathic abilities—usually his greatest asset—are rendered useless by the natives’ unique language, which is sung rather than spoken. Worse, the abduction of a powerful chieftain’s daughter has raised tensions to the boiling point. Now Flinx must depend on his own mettle—and of course Pip, the devoted minidrag with the deadly edge—to right wrongs, mend fences, and battle a cold-blooded adversary armed with enough firepower to blow them all away . . . and destroy the chance for peace in Largess forever.

Alan Dean Foster has written in a variety of genres, including hard science fiction, fantasy, horror, detective, western, historical, and contemporary fiction. He is the author of several New York Times bestsellers and the popular Pip & Flinx novels, as well as novelizations of numerous films, including Transformers, Star Wars, the first three Alien films, and the most recent one, Alien: Covenant. Foster and his wife, JoAnn Oxley, live in Prescott, Arizona, in a house built of brick that was salvaged from an early-twentieth-century miners’ brothel. He is currently at work on several new novels and media projects.