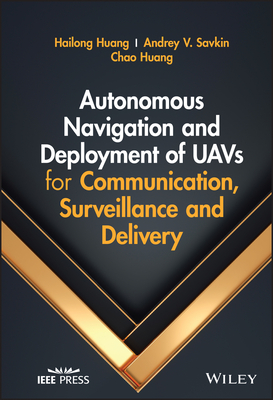 Autonomous Navigation and Deployment of UAVs for Communication, Surveillance and Delivery

One such example provided by the authors is a novel biologically inspired motion camouflage algorithm to covert video surveillance of moving targets by an unmanned aerial vehicle (UAV). All autonomous navigation and deployment algorithms developed in the book are computationally efficient, easily implementable in engineering practice, and based only on limited information on other UAVs of each and the environment.

Sample topics discussed in the work include:

Professionals in navigation and deployment of unmanned aerial vehicles, along with researchers, engineers, scientists in intersecting fields, can use Autonomous Navigation and Deployment of UAVs for Communication, Surveillance and Delivery to gain general knowledge on the subject along with practical, precise, and proven algorithms that can be deployed in a myriad of practical situations.

HAILONG HUANG, PhD, is an Assistant Professor at The Hong Kong Polytechnic University, Hong Kong. He is also an Associate Editor for the International Journal of Advanced Robotic Systems. His research interests include multi-robot systems, coverage control; system modeling and simulation. ANDREY V. SAVKIN, PhD, is a Professor and Head of Systems and Control in the School of Electrical Engineering and Telecommunications at University of New South Wales, Sydney, Australia. He was a co-author of the Wiley title Decentralized Coverage Control Problems for Mobile Robotic Sensor and Actuator Networks (2015). CHAO HUANG, PhD, is a Research Assistant Professor at The Hong Kong Polytechnic University, Hong Kong. From July 2020 to May 2021, she acted as a Guest Editor for the Spectrum special issue on "Advanced Sensing and Control for Connected and Automated Vehicles".