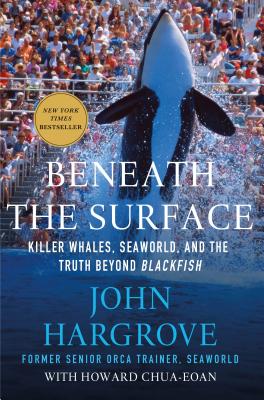 By John Hargrove, Howard Chua-Eoan
Email or call for price
Out of Print

Ever since the documentary Blackfish, Sea World has been faced with harsh criticism and falling profits. If you watched the documentary, you may recognize this author. One of the most experienced trainers working at Sea World at the time he decided to leave the amusement park, Hargrove worked with twenty different whales over fourteen years on two different continents. John Hargrove was one of a handful of former Sea World trainers featured in Blackfish, and now he is offering a more detailed look at his side of the story. This is more than your typical memoir, however. Hargrove manages to combine the stories and histories of many of the orcas that he worked with along with his own. Beneath the Surface is filled with ups and downs, and will likely make your heart clench in more than one place, especially if you consider yourself an animal lover in any sense of the word. Put it on your 'to read' list immediately.

Over the course of two decades, John Hargrove worked with 20 different whales on two continents and at two of SeaWorld's U.S. facilities. For Hargrove, becoming an orca trainer fulfilled a childhood dream. However, as his experience with the whales deepened, Hargrove came to doubt that their needs could ever be met in captivity. When two fellow trainers were killed by orcas in marine parks, Hargrove decided that SeaWorld's wildly popular programs were both detrimental to the whales and ultimately unsafe for trainers.

After leaving SeaWorld, Hargrove became one of the stars of the controversial documentary Blackfish. The outcry over the treatment of SeaWorld's orca has now expanded beyond the outlines sketched by the award-winning documentary, with Hargrove contributing his expertise to an advocacy movement that is convincing both federal and state governments to act.

In Beneath the Surface, Hargrove paints a compelling portrait of these highly intelligent and social creatures, including his favorite whales Takara and her mother Kasatka, two of the most dominant orcas in SeaWorld. And he includes vibrant descriptions of the lives of orcas in the wild, contrasting their freedom in the ocean with their lives in SeaWorld.

Hargrove's journey is one that humanity has just begun to take-toward the realization that the relationship between the human and animal worlds must be radically rethought.

New York Times bestselling author JOHN HARGROVE has 14 years' experience as a killer whale trainer. His experience spans both SeaWorld of California and SeaWorld of Texas where he was promoted to the highest ranking Senior Trainer. John also has an international reputation, having been a Supervisor with MarineLand in the south of France. He the author of Beneath the Surface. He resigned his position with SeaWorld in August 2012 and currently resides in New York City.

HOWARD CHUA-EOAN was News Director of TIME magazine from 2000 to 2013.

"You might have watched the documentary Blackfish. This is more powerful...." —Psychology Today

“A heart-tugging look at the lives of orca whales in captivity.” —People

“I highly recommend Beneath the Surface to readers of all ages, including those youngsters about whom Hargrove writes, who want to be just like him when he trained orcas to perform stupid and unnatural tricks. Hargrove is a very courageous man, and his book is open and honest and we should all thank him for taking the time to write it.” —Marc Bekoff, The Huffington Post

“A story of both dread and wonderment... books such as this have the ability to shine a light into the inner workings of corporate greed and redirect efforts from selling tickets to preserving, nurturing and enhancing the orcas' lives.” —The Huffington Post

“Elaborates on...[Blackfish's] claims but also testifies to the thrill of standing athwart four tons of muscle rushing through the water at 30 miles an hour. And, equally, the nearly mystical experience of bonding with an intelligence eerily similar to our own, yet ultimately unfathomable-and uncontrollable.” —Smithsonian Magazine

“As Hargrove's love for and knowledge of [orcas] increased, he gradually concluded that the work he was part of at SeaWorld was harming them... Hargrove covers both the joy of his own experiences with orcas as well as the case for why such interactions in captivity should end.” —Scientific American

“How would you cope if you felt that your life work contributed to a cause in which you no longer
believed?...Blends natural history and corporate indictment into an emotional story about a man changing sides in the argument over human domination of the animal world.” —Booklist

“It is with this same unique amalgam of "dread and wonderment" that Hargrove characterizes both his longtime, high-ranking professional relationship with orca whales and his astonishment at how broken the performance animal arena has become--particularly at SeaWorld… A shocking, aggressively written marine park exposé.” —Kirkus Reviews

“Beneath the Surface instantly grabs the reader's attention with a vivid description of an aggressive incident between a captive orca and former SeaWorld trainer John Hargrove. Clearly there is still much to reveal about the grim reality behind the 'glamorous' orca show. This firsthand account may be the final push that ends the inhumane practice of keeping the world's largest marine predator and one of the most intelligent and social mammals on the planet in concrete tanks.” —Naomi A. Rose, Ph.D., Animal Welfare Institute

“This deeply personal look at the lives of whales in captivity will open your eyes and tug your heart. John Hargrove's work as a senior trainer at SeaWorld made him understand how we need to rethink our relationships with the animal world.” —Walter Isaacson, author of Steve Jobs and Einstein: His Life and Universe

“In Beneath the Surface, John Hargrove flawlessly unravels the trainer's dilemma of loving an animal with all your heart while working at a place that doesn't. It is as much a razor sharp indictment as it is a story of a broken heart.” —Gabriela Cowperthwaite, director, Blackfish

“A deeply honest personal account of a man's awakening from orca trainer to orca advocate as he learned the painful truth about what lies beneath the surface of SeaWorld” —Lori Marino, Ph.D., Researcher and Founder, The Kimmela Center for Animal Advocacy

“The thin veneer of SeaWorld's fantasy that the orca are happy in their tanks is peeled back in this mesmerizing and compelling book about Hargrove's work as a trainer and his journey to become one of the few speaking out against the cruelty being conducted even to this day.” —Ingrid N. Visser, researcher and founder of the Orca Research Trust

“Hargrove takes us inside his life as a former SeaWorld devotee, his 14 years as an orca trainer, and especially his deep respect and affection for the orcas he has worked with. No short phrases can adequately summarize the personalities and idiosyncrasies of the 20 orcas he performed with and cared for, but this book gives us great insight into their piercing intelligence and keen awareness. Perhaps most interestingly, Hargrove reveals the complex emotional lives of the orcas he came to know, and how they brought out his own feelings toward them.” —Howard Garrett, Director, The Orca Network

“Details the disturbing practices SeaWorld has become known for...Hargrove is careful to emphasize that his bond with the captive whales he spent years interacting with was real and powerful, even 'some of the deepest and most magnificent relationships I've had in my life.'” —The Dodo

“[Hargrove has] delved deeper into the ethical issues surrounding orca captivity, convincingly making the case that these intelligent, sentient animals can only be free in the wild.” —Nature World News

"Eye opening... a story of personal discovery, ambition, broken dreams, and hope for a better future for animals that are complex beyond our understanding, YET like humans in many ways" —Helen Bailey, A Wild Life