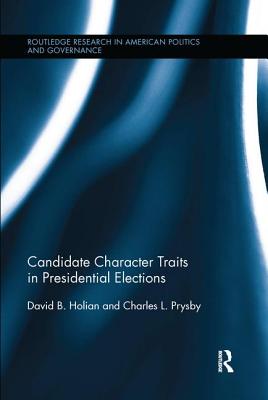 By David B. Holian, Charles L. Prysby
Email or call for price

In this book, David Holian and Charles Prysby set out to examine the effect that trait perceptions have on the vote, how these perceptions are shaped by other attitudes and evaluations, and what types of voters are most likely to cast a ballot on the basis of the character traits of the presidential candidates. Using the American National Election Studies (ANES) surveys, the authors find that traits do have a very substantial effect on the vote, that different candidates have advantages on different traits, and that the opinions expressed by media pundits about how the candidates are viewed by the voters are often simplistic, and sometimes quite mistaken. Character traits are important to voters, but we need a better and more complete understanding of how and why these factors influence voters.

An essential read which provides a clear and original argument to all those interested in furthering their understanding of the importance of candidate character traits for the quality of American elections and democracy.