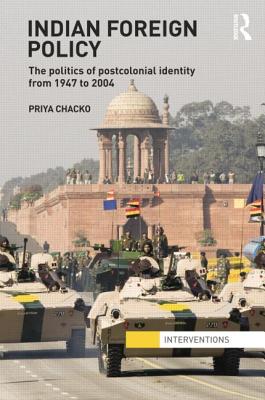 By Priya Chacko
Email or call for price

The rise of India as a major power has generated new interest in understanding the drivers of its foreign policy. This book argues that analysing India's foreign and security policies as representational practices which produce India's identity as a postcolonial nation-state helps to illuminate the conditions of possibility in which foreign policy is made.

Spanning the period between 1947 and 2004, the book focuses on key moments of crisis, such as the India-China war in 1962 and the nuclear tests of 1972 and 1998, and the approach to international affairs of significant leaders like Jawaharlal Nehru. The analysis sheds new light on these key events and figures and develops a strong analytical narrative around India's foreign policy behaviour, based on an understanding of its postcolonial identity.

It is argued that a prominent facet of India's identity is a perception that it is a civilizational-state which brings to international affairs a tradition of morality and ethical conduct derived from its civilizational heritage and the experience of its anti-colonial struggle. This notion of 'civilizational exceptionalism', as well as other narratives of India's civilizational past, such as its vulnerability to invasion and conquest, have shaped the foreign policies of governments of various political hues and continue to influence a rising India.

Priya Chacko is a Lecturer in International Politics in the School of History and Politics at the University of Adelaide, Australia. Her research interests include the normative basis of Indian foreign policy, non-Western thought in International Relations, and India's engagement with Africa and global governance.