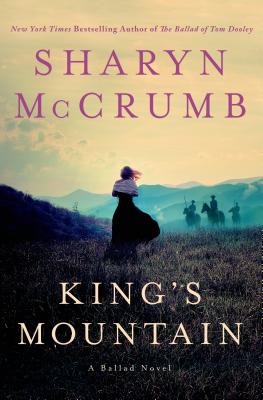 By Sharyn McCrumb
Email or call for price
Out of Print

This is book number 10 in the Ballad Novels series.

John Sevier had not taken much interest in the American Revolution. Homesteading in the Carolina mountains, Sevier was too busy fighting Indians and taming the wilderness to worry much about a far-off war, but when an arrogant British officer sends a message over the mountains, threatening to burn the settlers' farms and kill their families, the war becomes personal.

That abrasive officer is British Army Major Patrick Ferguson, who is both charmingly antagonistic and surprisingly endearing. The younger son of a Scottish earl, Ferguson suffers constant misfortunes, making his dedication and courage count for nothing. When he loses the use of his arm from an injury at Brandywine, his commander sends him south, away from the war—which, in 1780, George Washington and the Continental Army are losing. Ordered to recruit wealthy Southern planters to the British cause, Ferguson courts disaster by provoking the frontiersmen, and suddenly the far-off war is a sword's length away. The British aristocrat on a fine white horse is the antihero to Sevier's American pioneer spirit. Two Tory washerwomen, Virginia Sal—whose lucid voice lends humor and mysticism to the pages—and Virginia Paul, a mysterious woman too well-acquainted with death, portray the human side of the king's army. With a regiment of British regulars and local Tory volunteers, Ferguson believes he's an indomitable force.

Threatened by the Loyalists with invasion and the loss of their land, Sevier knows that Ferguson has to be stopped. In response, Sevier and his loyal comrades—many of whom would play key roles in later parts of American history—raise an unpaid volunteer militia of more than a thousand men. Bringing their own guns, riding their own horses, and wearing just their civilian clothes, the Overmountain Men ally themselves with other states' militias and march toward Charlotte in search of Ferguson's marauding army.

On a hill straddling the North and South Carolina lines, in what Thomas Jefferson later called "the turning point of the American Revolutionary War," the Overmountain Men triumph, proving that the British forces can be stopped. Their victory at King's Mountain inspired the colonies to fight on, ending the war one year later at Yorktown.

Peppered with lore and the authentic heart of the people in McCrumb's classic Ballads, this is an epic book that paints the brave action of Sevier and his comrades against a landscape of richly portrayed characters. Harrowing battle descriptions compete with provoking family histories, as McCrumb once again shares history and legend like no one else. Both a novel of war and family, crafted with heart and depth, King's Mountain celebrates one of Appalachia's finest hours.

“Ms. McCrumb writes with quiet fire and maybe a little mountain magic....She plucks the mysteries from people's lives and works these dark narrative threads into Appalachian legends older than the hills. Like every true storyteller, she has the Sight.” —The New York Times Book Review on the Ballad Novels

“There are few writers today who are able to blend past and present, tradition and law, legends and headlines in a wholly credible fashion--Tony Hillerman springs inevitably to mind. Sharyn McCrumb is another; her widely acclaimed Ballad series is one of the finest being written today.” —Bookpage

“From snippets of rural life, scraps of memories, and fragments of tragedy, [McCrumb] has stitched together a vivid American heirloom.” —Newsday on the Ballad Novels

“True to the language and culture of its time and place...the Ballad series could be headed for bestsellerdom.” —Library Journal

“Being a McCrumb novel, The Devil Amongst the Lawyers brims with compelling characters who are passionate, flawed, and unforgettable.” —Rapid River Arts & Culture Magazine

“With fluid writing and sensitive telling, McCrumb presents her Appalachian series as perfectly as dogwood in the spring.” —Houston Chronicle on the Ballad Novels

“Ms. McCrumb may have written the Americana historical thriller of the year.” —Midwest Book Review on The Ballad of Tom Dooley

“The old families who live in proud seclusion up in these hills produce a number of wise souls whose voices are pure poetry.” —The New York Times Book Review on The Devil Amongst the Lawyers