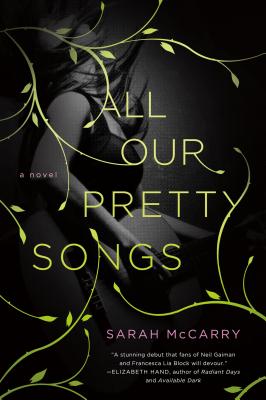 This is book number 1 in the The Metamorphoses Trilogy series.

This is a story about love, but not the kind of love you think. You'll see…

In the lush and magical Pacific Northwest live two best friends who grew up like sisters: charismatic, mercurial, and beautiful Aurora, and the devoted, watchful narrator. Each of them is incomplete without the other. But their unbreakable bond is challenged when a mysterious and gifted musician named Jack comes between them.

His music is like nothing I have ever heard. It is like the ocean surging, the wind that blows across the open water, the far call of gulls.

Suddenly, each girl must decide what matters most: friendship, or love. What both girls don't know is that the stakes are even higher than either of them could have imagined. They're not the only ones who have noticed Jack's gift; his music has awakened an ancient evil—and a world both above and below which may not be mythical at all. We have paved over the ancient world but that does not mean we have erased it.
The real and the mystical; the romantic and the heartbreaking all begin to swirl together in All Our Pretty Songs, Sarah McCarry's brilliant debut, carrying the two on journey that is both enthralling and terrifying.
And it's up to the narrator to protect the people she loves—if she can.

Sarah McCarry was born in Seattle. She is the recipient of a MacDowell Colony fellowship and has written for Glamour, The Stranger newspaper, the Huffington Post Books Blog, and Tor.com. She has published essays in Listen Up: Voices from the Next Feminist Generation (Seal Press) and Voices of a New Generation: A Feminist Anthology (Prentice Hall). Since 1999, she’s written and produced the zine Glossolalia; it’s currently in the permanent collections of libraries across the country, including Columbia University, Barnard College, the Multnomah County Public Library, and the San Francisco Public Library. In August of 2009 she started the personal blog www.therejectionist.com. The blog currently has over a thousand followers and gets over 20,000 hits a month. She has bicycled alone across two continents and worked as a domestic violence advocate, a circus performer, a clearcut surveyor, an archivist, and a letterpress printer. She lives in Brooklyn, New York. She is the author of All Our Pretty Songs, Dirty Wings, and About a Girl.

“McCarry's beautifully rich narrative is smooth and seductive...effortlessy dropping references to authors from Rousseau to Block...Goths and romantics both will eagerly await the second installment of this suspenseful planned trilogy.” —Booklist (starred review)

“If you love Francesca Lia Block, Neil Gaiman, or mythology--or if you know what it's like to have best friend who is your soulmate--you will devour this book. (It also has a diverse cast of characters, which is something that you sadly don't see enough of in young-adult fiction.)” —Rookie Magazine

“A stunning debut that fans of Neil Gaiman and Francesca Lia Block will devour.” —Elizabeth Hand, author of Radiant Days and Available Dark

“A brilliant dose of the creepy and sublime.” —Neesha Meminger, author of Into The Wise Dark and Jazz In Love

“I loved every minute I spent in McCarry's hypnotic and beautifully-drawn world.” —Madeline Miller, New York Times bestselling and author of The Song of Achilles

“A punk rock remix of the myth of Orpheus that is as much about best friends as it is about first love. Buy it, love it, pass it along.” —Alexander Chee, author of Edinburgh