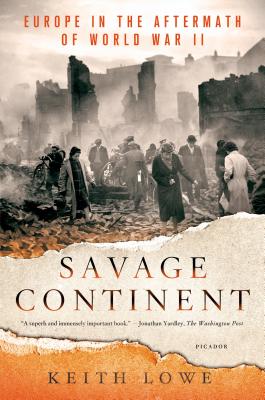 The bell that was rung at the beginning of World War II echoed far beyond 1945. The end of the war did not bring an end to the chaos, and even now we still feel the aftermath. Savage Continent is massive in scope and even greater in ambition. The subject matter is dark and controversial, but delivers a rich understanding of the price that is paid after all-out war. While we call it the post-war, all of the elements of conflict remain: famine, migration, violence, looting. While it is hard to judge actions taken in moments of chaos, this book will give you pause, and if you're like me, it might just change how you view the war.

Winner of the PEN Hessell-Tiltman Prize

"A superb and immensely important book."—Jonathan Yardley, The Washington Post

The Second World War might have officially ended in May 1945, but in reality it rumbled on for another ten years...

The end of World War II in Europe is remembered as a time when cheering crowds filled the streets, but the reality was quite different. Across Europe, landscapes had been ravaged, entire cities razed, and more than thirty million people had been killed in the war. The institutions that we now take for granted—such as police, media, transport, and local and national government—were either entirely absent or compromised. Crime rates soared, economies collapsed, and whole populations hovered on the brink of starvation.. In Savage Continent, Keith Lowe describes a continent where individual Germans and collaborators were rounded up and summarily executed, where concentration camps were reopened, and violent anti-Semitism was reborn. In some of the monstrous acts of ethnic cleansing the world has ever seen, tens of millions were expelled from their ancestral homelands. Savage Continent is the story of post–war Europe, from the close of the war right to the establishment of an uneasy stability at the end of the 1940s. Based principally on primary sources from a dozen countries, Savage Continent is the chronicle of a world gone mad, the standard history of post–World War II Europe for years to come.

Keith Lowe is the award-winning author of Savage Continent: Europe in the Aftermath of World War II, and the critically acclaimed history Inferno: The Fiery Devastation of Hamburg, 1943. He is widely recognized as an authority on the Second World War, and has often spoken on TV and radio, both in Britain and the United States. He was an historical consultant and one of the main speakers in the PBS documentary The Bombing of Germany, which was also broadcast in Germany. His books have been translated into several languages, and he has lectured in Britain, Canada and Germany. He lives in North London with his wife and two kids.

“A superb and immensely important book.” —The Washington Post

“A breathtaking, numbing account of the physical and moral desolation that plagued Europe in the late 1940s. Authoritative but never dry, stripping away soothing myths of national unity and victimhood, this is a painful but necessary historical task superbly done.” —Kirkus Reviews

“Deeply harrowing. Moving, measured, and provocative. A compelling picture of a continent physically and morally brutalized by slaughter.” —The Sunday Times (London)

“A graphic and chilling account of the murderous vengeance, terroristic reprisals, and ferocious ethnic cleansing that gripped Europe following--and often as a direct continuation of--the Second World War. Keith Lowe's excellent book paints a little-known and frightening picture of a continent in the embrace of lawlessness, chaos, and unconstrained violence.” —Ian Kershaw, author of The End: The Defiance and Destruction of Hitler's Germany, 1944–1945

“Savage Continent is a powerful and disturbing book, painstakingly researched and written with both authority and an impressive historical sweep.” —James Holland, author of Italy's Sorrow and The Battle of Britain