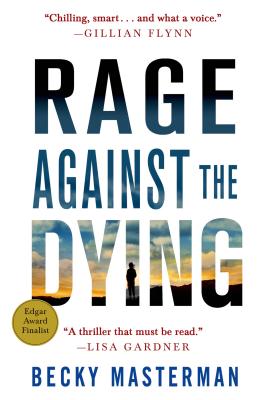 By Becky Masterman
$16.99
Email or call for price.

This is book number 1 in the Brigid Quinn Series series.

Masterman's amazing debut novel is unlike anything I've read before and features a unique protagonist: a 59-year old woman, retired FBI agent and a complete bad-ass. I couldn't get enough of Rage Against the Dying which is part twisted thriller and psychological exploration of the main characters choices and complicated feelings. I'm hoping this is a series, and so will anyone else who reads this book!

“Retired FBI agent Brigid Quinn is trying to live like a normal person, with a husband, dogs, and quaint domesticity, until one day a man claims to be a serial killer whom Quinn chased but could never catch. Just as the case seems to be finally closing, Quinn finds herself thrown back into the investigation and the apparent target of another murderer. Fast-paced, thrilling, and gritty, this is a tour de force of crime fiction that introduces us to a unique and intriguing female character.”
— Meaghan Beasley, Island Bookstore, Duck, NC

Brigid Quinn's experiences in hunting sexual predators for the FBI have left her with memories she wishes she didn't have and lethal skills she hopes never to need again. Having been pushed into early retirement by events she thinks she's put firmly behind her, Brigid keeps telling herself she's settling down nicely in Tucson with a wonderful new husband, Carlo, and their dogs.

But the past intervenes when a man named Floyd Lynch confesses to the worst unsolved case of Brigid's career—the disappearance and presumed murder of her young protégée, Jessica. Floyd knows things about that terrible night that were never made public, and offers to lead the cops to Jessica's body in return for a plea bargain. It should finally be the end of a dark chapter in Brigid's life. Except…the new FBI agent on the case, Laura Coleman, thinks the confession is fake, and Brigid finds she cannot walk away from violence and retribution after all, whatever the cost.

With a fiercely original and compelling voice, Becky Masterman's Rage Against the Dying marks the heart-stopping debut of a brilliant new thriller writer.

“Pulse-quickening…scorching… invigorating… In one final demonstration that she has learned the lessons of crime fiction well, Ms. Masterman hides important evidence in the unlikeliest place: within plain sight. But this book is too cleverly manipulative for readers to get ahead of Brigid in making such startling discoveries.” —Janet Maslin, The New York Times

“Wow. An absolute pleasure. Chilling, smart...and what a voice she has.” —Gillian Flynn, author of the #1 New York Times bestseller Gone Girl

“Masterman lives up to her name in this masterly combination of compelling character and plot to keep the pages turning.” —Library Journal (starred review)

“One of the most memorable FBI agents since Clarice Starling as well as a killer debut thriller.” —Publishers Weekly Pick of the week (starred review)

“Brigid is a marvelous character, and her skills are fearsome for someone her age… fans of Lisa Gardner and Tess Gerritsen will love this book.” —Booklist

“A scorching, humane first novel that reads as if Masterman's been sitting for a long time on some truly ugly secrets.” —Kirkus Reviews