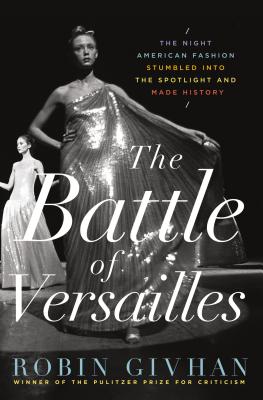 By Robin Givhan
$27.99
Not Available In-Store - Usually Ships from Warehouse in 1-5 Days

The world of fashion unexpectedly changed forever one night in November 1978. French designers had previously set fashion trends and the world followed: Dior gave us the New Look, Yves Saint Laurent invented Le Smoking suit, and Givenchy outfitted Audrey Hepburn like a princess. But on that fateful night five American designers were pitted against five French legends in a runway show and, against all odds, the Americans were the clear victor. It was the fashion world’s Miracle on Ice and Robin Givhan is the perfect person to tell the story! Her exhaustive research makes this book come alive while still including all the gossipy details among these clashing egos. She covers all the players, from designers to attendees. This book is about more than just clothing, it touches on race, history, nationalism, and a new social order. I was completely immersed!

"It was a big deal when American fashion went to Versailles. Who better than Robin Givhan to tell this captivating story?" - Diane von Furstenberg

On November 28, 1973, the world's social elite gathered at the Palace of Versailles for an international fashion show. By the time the curtain came down on the evening's spectacle, history had been made and the industry had been forever transformed. This is that story.

Conceived as a fund-raiser for the restoration of King Louis XIV's palace, in the late fall of 1973, five top American designers faced off against five top French designers in an over-the-top runway extravaganza. An audience filled with celebrities and international jet-setters, including Princess Grace of Monaco, the Duchess of Windsor, Paloma Picasso, and Andy Warhol, were treated to an opulent performance featuring Liza Minnelli, Josephine Baker, and Rudolph Nureyev. What they saw would forever alter the history of fashion.

The Americans at the Battle of Versailles- Oscar de la Renta, Bill Blass, Anne Klein, Halston, and Stephen Burrows - showed their work against the five French designers considered the best in the world - Yves Saint Laurent, Hubert de Givenchy, Pierre Cardin, Emanuel Ungaro, and Marc Bohan of Christian Dior. Plagued by in-fighting, outsized egos, shoestring budgets, and innumerable technical difficulties, the American contingent had little chance of meeting the European's exquisite and refined standards. But against all odds, the American energy and the domination by the fearless models (ten of whom, in a groundbreaking move, were African American) sent the audience reeling. By the end of the evening, the Americans had officially taken their place on the world's stage, prompting a major shift in the way race, gender, sexuality, and economics would be treated in fashion for decades to come. As the curtain came down on The Battle of Versailles, American fashion was born; no longer would the world look to Europe to determine the stylistic trends of the day, from here forward, American sensibility and taste would command the world's attention.

Pulitzer-Prize winning fashion journalist Robin Givhan offers a lively and meticulously well-researched account of this unique event. The Battle of Versailles is a sharp, engaging cultural history; this intimate examination of a single moment shows us how the world of fashion as we know it came to be.

ROBIN GIVHAN is a style and culture critic based in Washington, D.C. She is the former fashion editor of The Washington Post, where she covered the news, trends, and business of the international fashion industry, and she is the former style editor for Time, and The Daily Beast. In 2006 she won the Pulitzer Prize in criticism for her fashion coverage. The Battle of Versailles is her first book.

“Givhan handles the story-and all its gossip, backbiting, and raging egos-with meticulous dexterity. She has an eye for the absurd and flamboyant detail...some [of which] seem astonishing in retrospect. The Americans...stunned the crowd that night... with their success in capturing the spirit of the modern woman through both their clothes and the pure energy they poured into the show.” —Thessaly La Force, The New York Times Book Review

“In her debut book, Pulitzer Prize-winning Washington Post fashion critic Givhan delivers a delightful, encyclopedic exploration of the players and leaders in the field.... Readers need not be fashion mavens to enjoy this entertaining episode of history, enhanced by Givhan's effortless ability to illustrate the models and designers (particularly Lambert) who changed how we dress.” —Kirkus Reviews

“Givhan paints a captivating portrait of the ethos of the era, from race riots and the Kerner Report to a "cultural... fascination with black identity" and glamorous nights at the disco, with juicy tales about arrogant designers acting out. While candid about the designers' faults, this is largely a glowing tribute to five iconic artists and their legacy in the fashion world.” —Publishers Weekly

“It was a big deal when American Fashion went to Versailles…who better than Robin Givhan to tell this captivating story?” —Diane von Furstenberg

“Reality TV has nothing on The Battle of Versailles. The year is 1973, and five legendary French couturiers face off against a team of their Seventh Avenue counterparts. There are hissy fits, liveried footmen, a party at Maxim's, and (prefiguring "Spinal Tap") a backdrop mistakenly measured in feet instead of meters. Halston refers to himself in the third person. A motley supporting cast that includes Josephine Baker, Liza Minnelli, Kay Thompson, Rudolf Nureyev, showgirls from the Crazy Horse, and a phalanx of dazzling black American models creates a spectacle, and the gratin of Paris society turns out. In this picturesque account, Robin Givhan weaves together the tectonic social and cultural shifts that set the stage for an epic fashion showdown.” —Holly Brubach, author of A DEDICATED FOLLOWER OF FASHION

“In The Battle of Versailles, Pulitzer-prizing winning fashion critic Robin Givhan expertly captures the players and the scene of a turning point in both fashion and American culture, showing that chutzpah and savviness count as much as craftsmanship and refinement. With in-depth reporting and her warm, informative voice, Givhan proves that a fashion show is about far more than clothes. Indeed, as this fascinating book shows, it can spark a social revolution.” —Dana Thomas, author of the New York Times bestselling DELUXE: HOW LUXURY LOST ITS LUSTER

“Robin Givhan's book recounts how the French fashion establishment in November 1973 fell in love with American couture. The Battle of Versailles tells the behind-the-scene story of the night that wildly cheering French critics gave a standing ovation to five American designers and their stunning black models. Givhan provides readers with both a front row and backstage view of the drama. It's a wonderfully fun read of how a few daring Yanks won recognition in world fashion.” —George Taber, author of THE JUDGMENT OF PARIS

“The Battle of Versailles is a fashion primer, a history lesson and a juicy tale with colorful and insightful character studies.” —Newsday

“As she sets up the saga of the legendary Versailles show, Givhan miraculously gives enough history and back story to paint a backdrop for the action in her swiftly-moving tale without burdening the plot with unnecessary details.” —The Boston Globe

“Fashion critic Robin Givhan dismantles the story of how sexual, racial and gender tensions in the U.S. helped create the perfect environment for American designers to burst upon the exclusive French fashion scene one fateful night in 1973.” —The Chicago Tribune

“Robin Givhan's enthusiastic history "The Battle of Versailles" is an effort to do for fashion what George Taber's "The Judgment of Paris" did for wine: focus on a broad cultural shift through the lens of a single occasion... With a huge cast of characters and a wealth of detail, Givhan leaves no scrap of information out...Perhaps, as with all great parties, you just had to be there.” —The Washington Post

“A vivid account of the 1973 runway event at Versailles that traces how then-emerging designers, including Oscar de la Renta and Anne Klein, helped establish America as a dominant force in international style.” —NPR