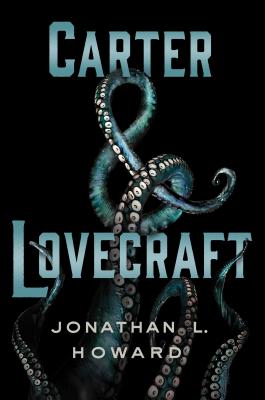 By Jonathan L. Howard
$34.99
Not Available In-Store - Usually Ships from Warehouse in 1-5 Days

This is book number 1 in the Carter & Lovecraft series.

A Shelf Awareness Best Book of the Year

"Carter & Lovecraft is a Pandora's box loaded with all the wonderfully twisted stuff I love, including a two-fisted homicide cop turned PI, warped realities, a mysterious bookstore, the Cthulhu mythos, a dash of romance, and creepy fish-men. What's not to love? Jonathan L. Howard knows how to show his readers a wickedly good time." —Christopher Golden, New York Times bestselling author Dead Ringers

Daniel Carter used to be a homicide detective, but his last case—the hunt for a serial killer—went wrong in strange ways and soured the job for him. Now he's a private investigator trying to live a quiet life. Strangeness, however, has not finished with him.

First he inherits a bookstore in Providence from someone he's never heard of, along with an indignant bookseller who doesn't want a new boss. She's Emily Lovecraft, the last known descendant of H.P. Lovecraft, the writer from Providence who told tales of the Great Old Ones and the Elder Gods, creatures and entities beyond the understanding of man.

Then people start dying in impossible ways, and while Carter doesn't want to be involved, he's beginning to suspect that someone else wants him to be. As Carter reluctantly investigates, he discovers that H. P. Lovecraft's tales were more than just fiction, and he must accept another unexpected, and far more unwanted, inheritance.

“Carter & Lovecraft is a Pandora's Box loaded with all of the wonderfully twisted stuff I love, including a two-fisted homicide cop turned P.I., warped realities, a mysterious bookstore, the Cthulhu mythos, a dash of romance, and creepy fish-men. What's not to love? Jonathan L. Howard knows how to show his readers a wickedly good time.” —Christopher Golden, New York Times bestselling author of Dead Ringers on Carter & Lovecraft

“Something new under Lovecraft's leering stars. Once again we discover that H.P. Lovecraft 's tales were more than mere fictions, and so is this novel—it's a very good fiction. I'll be keeping my eyes open for more novels from Mr. Howard (no, not Robert E. but Jonathan L.).” —Brian Lumley, author of Necroscope, on Carter & Lovecraft

“So much Lovecraftian fiction misses the point. You want to shake the author and shout, 'Weren't you paying attention?' Jonathan L. Howard gets it right and offers a delightfully original (and non-Euclidean) twist on the mythos and H.P. Lovecraft himself. Highly recommended.” —F. Paul Wilson, author of the Repairman Jack series, on Carter & Lovecraft

“Layer by layer, Howard deconstructs the Lovecraftian universe. His detective protagonist is plunged into the heart of a bloody mystery where every step forward brings him closer to doom, and where every revelation peels away the familiar, the known, and finally, all that is rational. Carter & Lovecraft is a sleek, addicting horror novel that gleefully inverts and contradicts Mythos tropes.” —Laird Barron, author of The Beautiful Thing That Awaits Us All

“In the cosmic darkness between Sam Spade and Dirk Gently, there's a nest of tentacles. On that nest of tentacles is Jonathan L. Howard's Carter and Lovecraft. You are here. It doesn't get any more weird-boiled than this.” —Stephen Graham Jones, author of Growing Up Dead in Texas

"Providence (including its more imaginary pockets of cosmic wrongness) comes to life in this pleasant mix of mystery and eldritch horror from the author of the "Johannes Cabal" series. The two engaging protagonists could easily ground an ongoing series of otherwordly whodunits." —Library Journal

"Howard’s take on Lovecraft and his influence is unexpected and somewhat unique – and one of several reasons why this inaugural title is noteworthy." —Bookgasm

“Howard is a supremely talented writer and the Johannes Cabal series makes for superb reading. It would be easy at this point to say if you like Rankin or Fforde or Pratchett or Holt, then you will love these books, but while it may well be true it would be doing Howard a disservice.” —Sci-Fi-London on the Johannes Cabal Series

“Genre fans will appreciate Howard's attention to world building, while more general readers will simply enjoy all the horrific fun.” —Booklist on the Johannes Cabal Series

“Howard's ear for witty banter and his skill at rendering black comedy bode well for the future.” —Publishers Weekly on the Johannes Cabal Series

“Fans of the original Lovecraft will have their rewards ... but this series debut from Howard (Nightclubbing, 2015, etc.) shines brightest when keeping to his characters' easy banter and creepy deaths.” —Kirkus Reviews on Carter & Lovecraft

“This refreshingly original novel updates the eldritch horrors of H.P. Lovecraft for the 21st century.” —Publishers Weekly on Carter & Lovecraft

“Howard brings the fine writing and attention to detail (character, dialogue, environment) that he developed in the Cabal series to this new book, and his fans should follow him to Rhode Island. Those unfamiliar with the Cabal books, especially readers with a taste for modern-day urban fantasy, should also be pointed in this title’s direction.” —Booklist on Carter & Lovecraft

“In Carter & Lovecraft, Jonathan L. Howard (the Brothers Cabal series) crafts a creepy mystery in which the mythos of H.P. Lovecraft is more fact than fiction. Carter is an endearing protagonist with a dark sense of humor and distaste for private eye clichés. Emily Lovecraft resents her famous literary roots but becomes a spirited sidekick when her great-great-uncle's creations come to life. Together they make a formidable team and the solid foundation for a new series promised by Carter & Lovecraft's twist ending. Supernatural mystery and thrilling horror offer something to love for genre fans of all stripes.” —Shelf Awareness on Carter & Lovecraft

"Surely one of the most interesting novels of the year" —Locus

"Carter & Lovecraft is contemporary, smart, pacey -- and gets you to care." —Interzone