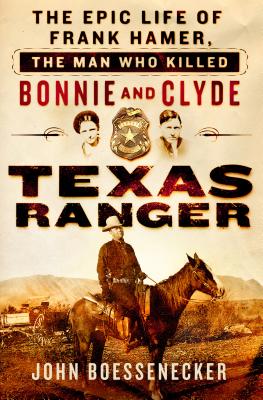 By John Boessenecker
Email or call for price
Out of Print

“Frank Hamer, last of the old breed of Texas Rangers, has not fared well in history or popular culture. John Boessenecker now restores this incredible Ranger to his proper place alongside such fabled lawmen as Wyatt Earp and Eliot Ness. Here is a grand adventure story, told with grace and authority by a master historian of American law enforcement. Frank Hamer can rest easy as readers will finally learn the truth behind his amazing career, spanning the end of the Wild West through the bloody days of the gangsters.”
--Paul Andrew Hutton, author of The Apache Wars

To most Americans, Frank Hamer is known only as the “villain” of the 1967 film Bonnie and Clyde. Now, in Texas Ranger, historian John Boessenecker sets out to restore Hamer’s good name and prove that he was, in fact, a classic American hero.

From the horseback days of the Old West through the gangster days of the 1930s, Hamer stood on the front lines of some of the most important and exciting periods in American history. He participated in the Bandit War of 1915, survived the climactic gunfight in the last blood feud of the Old West, battled the Mexican Revolution’s spillover across the border, protected African Americans from lynch mobs and the Ku Klux Klan, and ran down gangsters, bootleggers, and Communists. When at last his career came to an end, it was only when he ran up against another legendary Texan: Lyndon B. Johnson.

Written by one of the most acclaimed historians of the Old West, Texas Ranger is the first biography to tell the full story of this near-mythic lawman.

JOHN BOESSENECKER is considered one of the leading authorities on crime and lawlessness in the Old West. He is the award-winning author of Bandido: The Life and Times of Tiburcio Vasquez and When Law Was in the Holster: The Frontier Life of Bob Paul. In 2011 and 2013, True West magazine named Boessenecker Best Nonfiction Writer. He has appeared frequently as a historical commentator on PBS, The History Channel, A&E, and others. He lives in San Francisco, California.

"In terms of sheer action and violence, from close-quarters gunfights to Mexican-border ambushes to face-offs with lynch mobs, I’m hard-pressed to think of [a biography of an American lawman and detective] that rivals John Boessenecker’s excellent 'Texas Ranger'... a notable achievement" - Wall Street Journal

"The author’s painstaking research...brings forth an astounding story.... A superb account." - The Washington Times

"A fascinating look into the epic life of one of the greatest American lawmen of the 20th century." - San Antonio Express-News

"Finally, a complete, thoroughly researched and true account of Frank Hamer, whose experiences proved that the Wild West didn't end in 1900. All of our favorite lawmen pale in comparison to Hamer's service. ... Frank Hamer was the real deal and arguably the greatest lawman of the West." - Roundup Magazine

"In Texas, 'Frank Hamer' is just another way of saying 'Texas Ranger.' John Boessenecker has written the definitive biography of a lawman who did way more than rid the nation of Bonnie and Clyde."—Mike Cox, author of Wearing the Cinco Peso: The Texas Rangers 1821-1900 and Time of the Rangers: Texas Rangers from 1900 to the Present

“Texas Ranger should be required reading for students of Ranger history. John Boessenecker follows the career of legendary Texas Ranger Frank Hamer from the horseback days of the Old West through battles with bootleggers and gangsters in the 1930s. The level of original research here is apparent and Boessenecker leaves no stone unturned in his sleuthing of Hamer's past and his 52 gun battles. This is an action-packed story that does not read like a traditional biography.” —Stephen L. Moore, author of Texas Rising: The Epic True Story of the Lone Star Republic and the Rise of the Texas Rangers, 1836-1846

"Early on in this fine biography, author John Boessenecker makes the bold claim that Frank Hamer was the greatest American lawman of the 20th Century. Then, much like the man about whom he's writing, Boessenecker proceeds to back up what he says. Writing in clear, fast-moving prose and bolstered by meticulous research, Boessenecker tells the story of Frank Hamer's life and reveals that there was much more to it than simply being the man who tracked down Bonnie and Clyde. As a Texas Ranger, city marshal, range detective, special investigator, and other law enforcement positions, Hamer battled bandits, lynch mobs, revolutionaries, gunrunners, bootleggers, gangsters, and crooked politicians. Boessenecker spins this epic tale with great skill and without neglecting Hamer's mistakes and shortcomings, so that Texas Ranger is a fully realized portrait of a complex but admirable man. This is a compelling, long overdue biography of an important figure in the history of Texas and the Southwest." —James Reasoner, author of Outlaw Ranger and winner of the Lifetime Achievement Award from Western Fictioneers

“Well researched, extremely well written, thorough—a fine tribute to one of the greatest lawmen of the twentieth century.” —Robert M. Utley, author of Lone Star Justice: The First Century of the Texas Rangers

“Exhaustively researched and action-packed, John Boessenecker’s rendering of an extraordinary lawman’s life will thrill casual readers and enlighten fellow historians about the winding paths to justice in the United States. In Texas Ranger, Frank Hamer emerges as a principled, fallible man who strove to do the right thing under the most trying circumstances.” —Scott Zesch, author of The Captured: A True Story of Abduction by Indians on the Texas Frontier, winner of the TCU Texas Book Award

“Frank Hamer, last of the old breed of Texas Rangers, has not fared well in history or popular culture. John Boessenecker now restores this incredible ranger to his proper place alongside such fabled lawmen as Wyatt Earp and Eliot Ness. Here is a grand adventure story, told with grace and authority by a master historian of American law enforcement. Frank Hamer can rest easy as readers will finally learn the truth behind his amazing career--spanning the end of the Wild West through the bloody days of the gangsters.” —Paul Andrew Hutton, author of The Apache Wars.

"A compelling and dramatic biography of a Texas lawman in a era when laws were ignored and outlaws pretty much ruled. With its rich you-are-there-detail, Texas Ranger takes you on a trip into the past. Brace yourself for a white-knuckle ride. This is story telling at its best." —Margaret Coel, author of The Man Who Fell From the Sky

“The definitive biography of one of America’s greatest lawmen. Impressively researched; a whole posse of historians couldn’t corral the ins and outs of Frank Hamer’s fascinating life as well as John Boessenecker has done with this must-read book.”—Mark Lee Gardner, author of To Hell on a Fast Horse: The Untold Story of Billy the Kid and Pat Garrett

"Through the extraordinary experiences of this straight-shooting, honor-bound lawman, Boessenecker sets forth a critically needed look at the history of Texas lynchings and race riots while presenting evidence for the murderous nature of Bonnie and Clyde that foreordained their violent deaths." —Library Journal

"A biography of Texas Ranger Frank Hamer, from his youth in the Hill Country to his appointment to the Rangers in 1906. He’s most famous for killing Clyde Barrow and Bonnie Parker in 1934, but there’s much more to the cowboy lawman." —Fort Worth Star Telegram

"Frank Hamer’s is perhaps the last great story of the American West to be told. ... Well, Hollywood? Now you have the book, so go make the movie." —Dallas Morning News