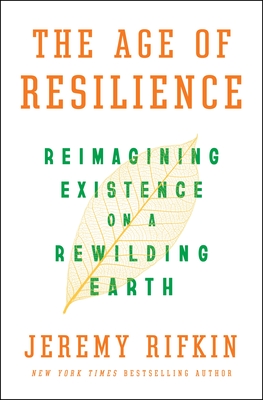 A sweeping new interpretation of the history of civilization and a transformative vision of how our species will thrive on an unpredictable Earth.

The viruses keep coming, the climate is warming, and the Earth is rewilding. Our human family has no playbook to address the mayhem unfolding around us. If there is a change to reckon with, argues the renowned economic and social theorist Jeremy Rifkin, it’s that we are beginning to realize that the human race never had dominion over the Earth and that nature is far more formidable than we thought, while our species seems much smaller and less significant in the bigger picture of life on Earth, undermining our long-cherished worldview. The Age of Progress, once considered sacrosanct, is on a deathwatch while a powerful new narrative, the Age of Resilience, is ascending.

In The Age of Resilience, Rifkin takes us on a new journey beginning with how we reconceptualize time and navigate space. During the Age of Progress, efficiency was the gold standard for organizing time, locking our species into the quest to optimize the expropriation, commodification, and consumption of the Earth’s bounty, at ever-greater speeds and in ever-shrinking time intervals, with the objective of increasing the opulence of human society, but at the expense of the depletion of nature. Space, observes Rifkin, became synonymous with passive natural resources, while a principal role of government and the economy was to manage nature as property. This long adhered to temporal-spatial orientation, writes Rifkin, has taken humanity to the commanding heights as the dominant species on Earth and to the ruin of the natural world.

In the emerging era, says Rifkin, efficiency is giving way to adaptivity as the all-encompassing temporal value while space is perceived as animated, self-organizing, and fluid. A younger generation, in turn, is pivoting from growth to flourishing, finance capital to ecological capital, productivity to regenerativity, Gross Domestic Product to Quality of Life Indicators, hyper-consumption to eco-stewardship, globalization to glocalization, geopolitics to biosphere politics, nation-state sovereignty to bioregional governance, and representative democracy to citizen assemblies and distributed peerocracy.

Future generations, suggests Rifkin, will likely experience existence less as objects and structures and more as patterns and processes and come to understand that each of us is literally an ecosystem made up of the microorganisms and elements that comprise the hydrosphere, lithosphere, atmosphere, and biosphere. The autonomous self of the Age of Progress is giving way to the ecological self of the Age of Resilience. The now worn scientific method that underwrote the Age of Progress is also falling by the wayside, making room for a new approach to science called Complex Adaptive Systems modeling. Likewise, detached reason is losing cachet while empathy and biophilia become the norm.

At a moment when the human family is deeply despairing of the future, Rifkin gives us a window into a promising new world and a radically different future that can bring us back into nature’s fold, giving life a second chance to flourish on Earth.

Jeremy Rifkin is president of the Foundation on Economic Trends and the bestselling author of over twenty books books, including The Third Industrial Revolution, The Zero Marginal Cost Society, The Green New Deal, The End of Work, and The Empathic Civilization. The National Journal named Rifkin as one of 150 people in the U.S. that have the most influence in shaping federal government policy. He has also testified before numerous congressional committees. Since 1994, Mr. Rifkin has been a senior lecturer at the Wharton School’s Executive Education Program at the University of Pennsylvania. Rifkin is ranked 123 in the WorldPost / HuffingtonPost 2015 global survey of “The World’s Most Influential Voices.” Rifkin has been an advisor to the leadership of the European Union since 2000. He also serves as an advisor to the People's Republic of China.

“In an increasingly alarming world of warming temperatures and global pandemics, [Rifkin] thinks humanity is shifting to an age of resilience that could transform our relationship with the natural world and each other. How might this play out? Rifkin sees a future of sweeping economic and social shifts where productivity gives way to regenerativity and gross domestic product to quality of life indicators. Consumerism, corporate conglomerates and globalization all wither while “eco-stewardship”, high-tech co-operatives and 'glocalization' flourish. The book will undoubtedly prove beguiling for many readers, even as it infuriates others. It is rarely different for a writer who has spent decades warning of the need to address environmental problems that the human species caused and is still struggling to fix.”
—Financial Times

“In his new book The Age of Resilience, economic and social theorist Jeremy Rifkin breaks ranks with the conventional economic wisdom that encourages unlimited economic development on a planet with finite natural resources. He suggests that we need to think of 'nature as our classroom' and reimagine every aspect of our existence - our concepts of time and space, economic life, governance, and even our notions of selfhood - so that life might flourish once again on Earth. This book invites us to engage in a radically new conversation about our species' future. It's long overdue.”
—Jane Goodall, Primatologist

"Jeremy Rifkin has challenged us to think differently about the world around us and the history that has come before us. He asks us—demands of us—to look at the consequences of progress, along with the accomplishments, and to imagine a new way of forging ahead, with an equal dosage of awe and humility and confidence in our ability to create systems that are more aligned with the natural world we inhabit. The Age of Resilience is a manifesto that embraces our unique skill sets and warns us of the consequences if we fail to do so. Every policy maker, politician, educator, civic and religious leader should heed his advice. Change at the magnitude needed to save the planet requires a global realignment in how we think. Fortunately, Rifkin has provided us with a detailed roadmap."
—Ken Burns, Documentary Filmmaker

"By worshipping efficiency, we've managed to build an economic system that melted the Arctic. Jeremy Rifkin argues here that it's time to prioritize resilience instead...I defy anyone not to be fascinated and provoked by the vision he unfolds!"
—Bill McKibben, Climate Activist and Author

“The Age of Resilience calls for the great turnaround from adapting nature to our species to adapting our species back to nature. This requires, as Jeremy Rifkin suggests, ‘a wholesale rethinking of our worldview.’ Among the most significant challenges will be our educational system that will need to be reimagined and reinvented to proffer new pedagogical approaches to learning, if we are to make the transformation from the Age of Progress to the Age of Resilience. Given Rifkin’s amazing track record of envisioning the future, no one can ignore the message of this new book. The Age of Resilience is truly an awe-inspiring treatise that must be read, comprehended, and most importantly acted upon.”
—Jerry Wind, Professor Emeritus, The Wharton School, and Founder of the Wharton Executive MBA Program

“The most striking feature of our multifaceted economic, social, and ecological global crisis is that none of our major problems can be understood in isolation. They are interconnected and interdependent and require corresponding systemic solutions. Jeremy Rifkin has designed effective systemic solutions to economic and technological problems at the request of governments and business organizations around the world for more than forty years. In this book he uses his rich experience to address the crisis of perception that threatens our species' future survival on Earth. This is a challenging, thought-provoking, yet deeply hopeful book. I recommend it warmly to anyone concerned about the future of humanity.”
—Fritjof Capra, Theoretical Physicist and Coauthor The Systems View of Life

“Jeremy Rifkin’s The Age of Resilience takes us through the long history of illusions, culminating in the Age of Progress, by which we came to think of ourselves as both separate from nature and masters of the earth. He asks us to reconsider how our obsession with unlimited growth and hyper efficiency—by which we measure progress—has ruptured the web of life and taken us and our fellow creatures to the very brink of a mass extinction. Rifkin helps us remember that we are an intimate part of an animate nature with the hope that we will rejoin our evolutionary family on an indivisible Earth. In these times of despair and hopelessness, Rifkin points to regenerativity, flourishing, resilience, and hope for the future.”
—Dr. Vandana Shiva, Feminist, Ecologist, and Activist in the developing world

“At a moment when humanity’s obsession with ‘efficiency’ has led us to the doorstep of cascading biodiversity loss and a catastrophic climate crisis, Jeremy Rifkin guides us toward an alternate future sparked by a prophetic vision of the Age of Resilience. Humanity’s window of opportunity to act on climate change is rapidly narrowing. With this in mind, Rifkin calls on humanity to engage in a deep self-examination of its relationship to nature in order to strengthen our bonds with our earthly home. This is the only path toward building a resilient world prepared to take on this century’s challenges.”
—Ani Dasgupta, President & CEO, World Resources Institute

“Jeremy Rifkin has given us a vision of the future that can inspire all those who want to be agents of change. He invites us to go beyond the idea of progress, and embrace a holistic and ecological conception of our existence on Earth. In the new era, empathy and biophilia take center stage for our reaffiliation with nature.”
—Carlo Petrini, Founder and President of Slow Food International