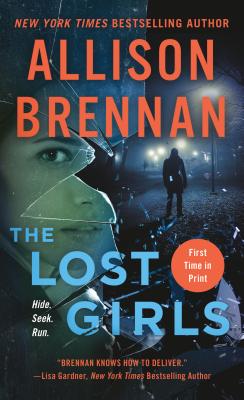 This is book number 11 in the Lucy Kincaid Novels series.

Photojournalist Siobhan Walsh has been searching for two sisters who disappeared two years ago in Mexico, so when she receives a call from a priest in Texas about an abandoned baby holding a locket with her name, she calls her friends in the FBI for help. The infant obviously belongs to one of the sisters, but how did she end up in Texas? And why did she abandon her newborn?

In The Lost Girls, Lucy Kincaid and her mentor, Supervisory Special Agent Noah Armstrong, track the missing girls and uncover a human-trafficking organization that leads to a seedy underworld in which nothing is as it seems. The bad guys seem to stay two steps ahead of them, leaving behind a trail of dead bodies and Lucy with more questions than answers.

Meanwhile Lucy’s fiance Sean Rogan has a crisis of his own. An old girlfriend returns with shocking news: not only does Sean have a son, but Jesse and his step-father have disappeared. The last thing Sean wants to do is leave Lucy when she’s investigating a horrific case, but his son is in grave danger. Torn between an impossible choice, he makes a decision that has far-reaching consequences for Sean, Lucy, and everything they hold dear.

“COMPELLING AND COMPLEX …BRENNAN [IS] A MASTER.”
—Associated Press

Allison Brennan is the New York Times and USA Today bestselling author of over thirty novels, including the Max Revere Novels (Abandoned, Shattered) and the Lucy Kincaid Novels (Cut and Run, Nothing to Hide) She was nominated for Best Paperback Original Thriller by the International Thriller Writers and is a two-time winner of the Daphne du Maurier Award by Kiss of Death.