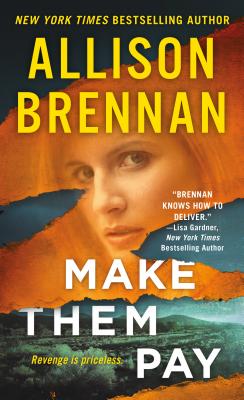 This is book number 12 in the Lucy Kincaid Novels series.

In Allison Brennan's Make Them Pay, Lucy Kincaid and Sean Rogan are finally tying the knot.

Two weeks before their wedding, a surprise visitor shows up at their door: Eden, Sean’s estranged sister from Europe. She claims she’s in town for the wedding and wants to mend fences. Lucy invites Eden to stay with them—after all, family is family—but her boss, SSA Noah Armstrong, knows far more about Eden’s sketchy past than he’s let on.

While Lucy is focused on her investigation tracking down dozens of children sold through illegal adoptions, Noah begins a quiet investigation of Eden and her elusive twin, Liam. He’s certain that, since they’re both thieves, they're here for a job or a heist. But they are up to something far more sinister than even Noah can imagine.

Liam has a score to settle with his family, and Sean has something he wants. The twins will do anything to get it—including putting Lucy’s life in danger. It'll take everyone—Kincaids and Rogans alike—to stop Liam before someone dies. Unfortunately, Liam's treachery has unforeseen consequences for Sean and Lucy, as a longtime enemy of the Rogan family hellbent on revenge sees an opportunity to make them all pay...

ALLISON BRENNAN is the New York Times and USA Today bestselling author of over forty novels, including the Lucy Kincaid and Max Revere series. She was nominated for Best Paperback Original Thriller by the International Thriller Writers and is a two-time winner of the Daphne du Maurier Award by Kiss of Death. Married for more than a quarter of a century, Allison and her husband Dan raised five children, and currently live in Arizona where they enjoy baseball's spring training and exploring the Grand Canyon.