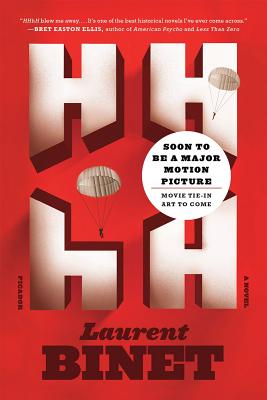 ""HHhH" blew me away... It's one of the best historical novels I've ever come across." Bret Easton Ellis, author of "American Psycho" and "Less Than Zero"
""
""A Finalist for the National Book Critics Circle Award for Fiction
A "Financial Times" Best Book of the Year
A "New York Times Book Review "Editors' Choice
HHhH: "Himmlers Hirn heisst Heydrich," or "Himmler's brain is called Heydrich." The most lethal man in Hitler's cabinet, Reinhard Heydrich seemed indestructible until two exiled operatives, a Slovak and a Czech, killed him and changed the course of history.

In Laurent Binet's mesmerizing debut, we follow Jozef Gabcik and Jan Kubi from their dramatic escape from Nazi-occupied Czechoslovakia to their fatal attack on Heydrich and their own brutal deaths in the basement of a Prague church. A seamless blend of memory, actuality, and Binet's own remarkable imagination, HHhH is at once thrilling and intellectually engrossing a fast-paced novel of the Second World War that is also a profound meditation on the debt we owe to history.

Laurent Binet was born in Paris, France, in 1972. He is the author of La Vie professionnelle de Laurent B., a memoir of his experience teaching in secondary schools in Paris. In March 2010, his debut novel, HHhH, won the Prix Goncourt du Premier Roman. Laurent Binet is a professor at the University of Paris III, where he lectures on French literature.Sam Taylor has written for The Guardian, Financial Times, Vogue and Esquire, and has translated such works as the award-winning HHhH by Laurent Binet, and the internationally-bestselling The Truth about the Harry Quebert Affair by Joel Dicker.
My Account • Sign In • Sign Out • Register
NEW & USED BOOKS
AUTHOR EVENTS • GIFTS
Changing Hands Tempe
6428 S McClintock Dr, Tempe, AZ 85283
480.730.0205
[Google Map]
Tues-Sun: 10am-6:30pm
Mon: Closed until further notice