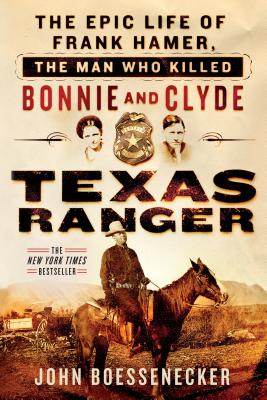 “Frank Hamer, last of the old breed of Texas Rangers, has not fared well in history or popular culture. John Boessenecker now restores this incredible Ranger to his proper place alongside such fabled lawmen as Wyatt Earp and Eliot Ness. Here is a grand adventure story, told with grace and authority by a master historian of American law enforcement. Frank Hamer can rest easy as readers will finally learn the truth behind his amazing career, spanning the end of the Wild West through the bloody days of the gangsters.”
--Paul Andrew Hutton, author of The Apache Wars

To most Americans, Frank Hamer is known only as the “villain” of the 1967 film Bonnie and Clyde. Now, in Texas Ranger, historian John Boessenecker sets out to restore Hamer’s good name and prove that he was, in fact, a classic American hero.

From the horseback days of the Old West through the gangster days of the 1930s, Hamer stood on the frontlines of some of the most important and exciting periods in American history. He participated in the Bandit War of 1915, survived the climactic gunfight in the last blood feud of the Old West, battled the Mexican Revolution’s spillover across the border, protected African Americans from lynch mobs and the Ku Klux Klan, and ran down gangsters, bootleggers, and Communists. When at last his career came to an end, it was only when he ran up against another legendary Texan: Lyndon B. Johnson.

Written by one of the most acclaimed historians of the Old West, Texas Ranger is the first biography to tell the full story of this near-mythic lawman.

JOHN BOESSENECKER is considered one of the leading authorities on crime and lawlessness in the Old West. He is the award-winning author of Bandido: The Life and Times of Tiburcio Vasquez and When Law Was in the Holster: The Frontier Life of Bob Paul. In 2011 and 2013, True West magazine named Boessenecker Best Nonfiction Writer. He has appeared frequently as a historical commentator on PBS, The History Channel, A&E, and others. He lives in San Francisco, California.