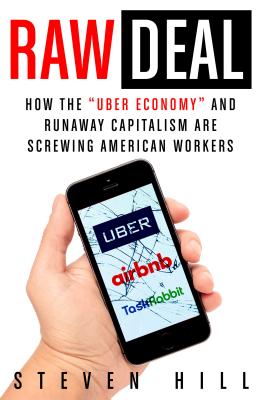 "What's going to happen to my job?"

That's what an increasing number of anxious Americans are asking themselves.

The US workforce, which has been one of the most productive and wealthiest in the world, is undergoing an alarming transformation. Increasing numbers of workers find themselves on shaky ground, turned into freelancers, temps and contractors. Even many full-time and professional jobs are experiencing this precarious shift. Within a decade, a near-majority of the 145 million employed Americans will be impacted. Add to that the steamroller of automation, robots and artificial intelligence already replacing millions of workers and projected to "obsolesce" millions more, and the jobs picture starts looking grim.

Now a weird yet historic mash-up of Silicon Valley technology and Wall Street greed is thrusting upon us the latest economic fraud: the so-called "sharing economy," with companies like Uber, Airbnb and TaskRabbit allegedly "liberating workers" to become "independent" and "their own CEOs," hiring themselves out for ever-smaller jobs and wages while the companies profit.

But this "share the crumbs" economy is just the tip of a looming iceberg that the middle class is drifting toward. Raw Deal: How the "Uber Economy" and Runaway Capitalism Are Screwing American Workers,by veteran journalist Steven Hill, is an exposé that challenges conventional thinking, and the hype celebrating this new economy, by showing why the vision of the "techno sapien" leaders and their Ayn Rand libertarianism is a dead end.

In Raw Deal, Steven Hill proposes pragmatic policy solutions to transform the US economy and its safety net and social contract, launching a new kind of deal to restore power back into the hands of American workers.

STEVEN HILL is a Senior Fellow with the New America Foundation and a Holtzbrinck Fellow at the American Academy in Berlin. He is a veteran journalist and author of the internationally praised Europe's Promise: Why the European Way is the Best Hope in an Insecure Age, which was selected as one of the "Top Fifteen Books of 2010" by The Globalist. His articles and media interviews have appeared in the New York Times, Washington Post, Wall Street Journal, The Atlantic, Financial Times, The Guardian, Le Monde, Die Zeit, Project Syndicate, Los Angeles Times, The Nation, Politico, Mother Jones, Huffington Post, Salon, Slate, BBC, C-SPAN, Fox News, NPR, PBS, Democracy Now, Austrian Public Broadcasting and many others. He lives in San Francisco, CA.

"Hill hits Silicon Valley darlings like Uber and Airbnb alongside the former online black market Silk Road, right-to-work laws, and factory robots all under the umbrella of “naked capitalism.” He explains how the rise of the “1099 workforce” is not limited to Silicon Valley; more and more traditional jobs in fields like manufacturing are turning to contractors to perform the same tasks full-time employees used to do. In addition to costing workers in benefits and safety nets, misclassifying workers as contractors costs federal and state governments billions of dollars annually in lost tax revenue." —Washington Monthly

"For anyone driven crazy by the faux warm and fuzzy PR of the so-called sharing economy Steven Hill’s Raw Deal: How the “Uber Economy” and Runaway Capitalism Are Screwing American Workers should be required reading… Hill is an extremely well-informed skeptic who presents a satisfyingly blistering critique of high tech’s disingenuous equating of sharing with profiteering…Hill includes two chapters listing potential solutions for the crises facing U.S. workers…Hill stresses the need for movement organizing to create a safety net strong enough to save the millions of workers currently being shafted in venture capital’s brave new world." —Counterpunch

"A growing underclass scrambling to make ends meet at the whim of increasingly picky and erratic employers, that number could balloon to 65 million within 10 years, or about half of the domestic workforce, warns Steven Hill in his troubling new book, Raw Deal. This brand of worker abuse cuts across industries and company size. Hill calls out Uber, AirBnb, Merck, Nissan, and dozens of others. Hill does a nice job of putting it in starker, easier-to-understand ways." —Washington Independent Review of Books

"Just read the manuscript for Raw Deal by Steven Hill. And I found myself laughing, crying and nodding my head. It's superbly well written and a great argument for what needs to be addressed in the peer economy model. While we all talk of value creation possibilities, we don't address the gap in value capture. His book nails the argument for where this leads. The name of his book captures what it is for most people. Well worth reading. I might go back and read it again." -- Nilofer Merchant, Best Selling Author, Thinkers50-designated #1 Future Thinker, Fellow of Martin Prosperity Institute

“This book is a must read for those concerned about how technology is disrupting the way we work and eroding the social safety net and how policy makers should respond. Hill delineates a promising new policy remedy: the creation of Individual Security Accounts to ensure that the growing number of workers in the "gig" economy have adequate safety-net protections and benefits.” —Laura D'Andrea Tyson, Professor of Business Administration and Economics, University of California-Berkeley and former Chair of the US President's Council of Economic Advisers

“We love to talk about technological innovation and disruption, yet rarely do we understand and discuss the actual consequences across broader society. Steven Hill's Raw Deal is superb, it is the best book I've read about the consequences of such "creative destruction" as the future hurtles toward us at breakneck speed.” —Peter Sims, Co-Founder and President, Silicon Guild and author of LITTLE BETS: How Breakthrough Ideas Emerge from Small Discoveries

“For many years, Steven Hill's analysis, commentary and activism have helped shape our understanding of the U.S. political economy. His latest book, Raw Deal, is a riveting exposé that shows with alarming lucidity what Americans stand to lose if we don't figure out how to rein in the technological giants that are threatening the American Dream.” —Katrina vanden Heuvel, editor and publisher of THE NATION

“A provocative, remedy-based perspective on the joint complexities of economic stability and ever expanding technology.” —Kirkus Reviews

“Steven Hill has written an important book that will help shape the debate on the "sharing economy." It raises fundamental issues about the extent to which the sharing economy is largely an effort to evade regulations, many of which serve important public purposes.” —Dean Baker, co-director, Center for Economic and Policy Research

“In Raw Deal, Steven Hill documents in frightening detail the ways in which new forms of work promise to plunge US workers and their families into further economic hardship, risk-assumption, and instability. Fortunately, Hill does not simply anticipate catastrophe; he closes the book with an informed call for institutional reforms that would lessen the negative consequences of these novel yet potentially dangerous forms of work. Anyone concerned with US working conditions - whether American workers, worker advocates, labor market scholars, or policy-makers - must read this book.” —Janet C. Gornick Professor of Political Science and Sociology, Graduate Center, City University of New York and Director, LIS: Cross-National Data Center in Luxembourg

“Steven Hill has written a timely and important book that raises all the right questions about the future of the 1099 economy. From ground zero in San Francisco, he has the perfect vantage point to see where the technologies and business innovations shaping our world are going. Raw Deal should be required reading for every policy maker trying to make sense of how we ensure the sharing economy benefits are shared by all and not captured by a small group of disruptors.” —Lenny Mendonca, Director Emeritus, McKinsey and Company

“The best takedown yet of how capitalism's "share" economy is only another shareholder one. Brilliant.” —Joel Rogers, Professor, UW-Madison, and author, AMERICAN SOCIETY: How It Really Works

“Raw Deal is a compelling work -- a stockpile of empirical analyses, anecdotes, and primary sourcing -- laying out the evidence of the incredibly detrimental, yet often-disregarded downsides of many of the most talked-about 21st century business models. Steven Hill's work is by far the most forceful case I've read describing the tragedy of the commons that is the 'sharing economy,' and provides a much needed reality check for investors, civil libertarians, and everyone who cares about the American dream. At its heart, Raw Deal is a necessary catalyst that encourages us to explore the dark side of Silicon Valley, presenting not only an in-depth critique, but a wealth of proactive solutions that could prevent the pending decimation of America's working class.” —Sascha Meinrath, Director of X-Lab, Palmer Chair, Penn State University

“Steven Hill's impressive Raw Deal exposes the so called "sharing economy". As Hill explains, the new insecurity of workers produces wealth that is shared mainly with the top one percent using new forms of predatory capitalism. Raw Deal is a much needed antidote to a lot of hype about how insecurity is supposedly the ticket to prosperity.” —Robert Kuttner, coeditor of the American Prospect, author of DEBTORS' PRISON: The Politics of Austerity Versus Possibility

“Raw Deal combines compelling stories with lots of evidence and policy prescriptions in a one-of-a-kind book on the "new economy." Getting below the techno-babble hype about "sharing" and "disruption," Hill shows the enormous human costs of "no rules" labor markets.” —Jeffrey Pfeffer, Professor, Graduate School of Business, Stanford University, Fortune columnist, and author of LEADERSHIP BS: Fixing Workplaces and Careers One Truth at a Time

“Steven Hill’s book Raw Deal is a red-faced, steam-out-the-ears indictment of sharing apps. Yet Hill offers a pragmatic, almost post-ideological solution: “individual security accounts” for workers. Companies that use independent contractors, or offer scant benefits for employees, would have to add on a certain percentage of their pay as a contribution to those accounts, which would cover health care, unemployment insurance, and more. There’d be a mechanism — and a requirement — for companies to contribute to the long-term well-being even of workers who aren’t on their traditional payrolls.” —Dante Ramos, Boston Globe

“Raw Deal is a book for its time. Steven Hill perfectly captures the anxiety of the American worker in today’s increasingly digital economy. Hill presents some compelling ideas, the most important being something he calls the Economic Singularity. In this unfortunate tipping point, the concentration of wealth in the hands of the few results in economic implosion because the 99 percent can’t afford to buy anything the 1 percent has to sell. The United States is turning into a nation of 1099 workers who eke out a living driving cars, renting rooms and running errands for people who apparently have better things to do with their time. Throw in self-thinking computers and obedient robots, and there won’t be any work left for plain old Homo sapiens...Hill proposes that we offer 1099 workers a new safety net consisting of tax deductions, individual security accounts and multiemployer health care plans. All good ideas." —Thomas Lee, columnist, San Francisco Chronicle