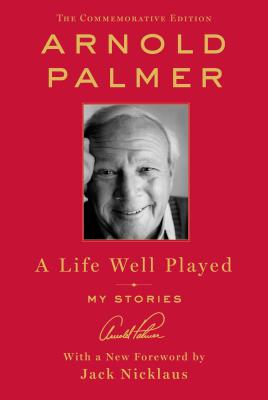 By Arnold Palmer, Jack Nicklaus (Foreword by)
Email or call for price
Out of Print

The commemorative edition of the instant New York Times bestseller--now with a foreword by Jack Nicklaus!

"A wonderful compilation that reflects who he was as a person, as a golfer, and as someone who believed in giving back. He was a champion at each turn, and it was an honor not just knowing him and competing against him for nearly 60 years, but also being his friend." —Jack Nicklaus, from the foreword

This book is Palmer’s parting gift to the world -- a treasure trove of entertaining anecdotes and timeless wisdom that readers, golfers and non-golfers alike, will celebrate and cherish. No one has won more fans around the world and no player has had a bigger impact on the sport of golf than Arnold Palmer. In fact, Palmer is considered by many to be the most important professional golfer in history, an American icon.

In A Life Well Played, Palmer takes stock of the many experiences of his life, bringing new details and insights to some familiar stories and sharing new ones. This book is for Arnie's Army and all golf fans but it is more than just a golf book; Palmer had tremendous success off the course as well and is most notable for his exemplary sportsmanship and business success, while always giving back to the fans who made it all possible. Gracious, fair, and a true gentleman, "Arnie" was the gold standard of how to conduct yourself in your career, life, and relationships. Perfect for men and women of all ages, his final book offers advice and guidance, sharing personal stories of his career on the course, success in business, and the great relationships that gave meaning to his life.

ARNOLD PALMER is regarded as one of the greatest players in professional golf history. He won seven major championships: The Masters four times, the U.S. Open once, and the Open Championship twice. "The King" was the first superstar of the sport's television age and is one of the athletes credited with popularizing and commercializing the sport. Palmer won the PGA Tour Lifetime Achievement Award in 1998 and, in 1974, was one of the original inductees into the World Golf Hall of Fame. He passed away in 2016 after completing his book, A Life Well Played.

Jack Nicklaus is widely considered the best golfer the game has ever seen. He has been a consistent winner as an amateur, a pro, and a senior. He lives with his wife, Barbara, in North Palm Beach, Florida.